Late night comedy continues at Sonoma County's only late night venue! Invite your friends to one of our hottest line-ups yet!

Enjoy a belly full of beer and laughs inside the Victory House! We are excited to start the year off with a BANG after many SOLD OUT shows in 2021! Enjoy an intimate indoor seated setting with table service through our Order and Pay QR codes. Just kick back and enjoy the show! We have incredible line-ups you don't want to miss out on.

Headliner Ngaio Bealum- Ngaio Bealum uses his great storytelling ability, razor sharp wit and engaging stage presence to leave audiences howling with laughter. He has earned a 5 star rating on Ticketmaster.com and has appeared on ABC, MTV, BET, Comedy Central, and many other television programs. He has opened for Dave Chappelle and Weird Al (but not at the same time), and is also a regular guest on The Doug Benson Podcasts. He can currently be seen on Netflix as the co-host of the hit show "Cooking on High" Ngaio is constantly on the road, and has headlined comedy clubs and performed at music and arts festivals all over the country. the dank Diplomat has been a road comic and a cannabis activist for a long time.

Featuring Ellis Rodriguez- Ellis Rodriguez is the 2017 San Francisco Comedy Competition winner and is hot as it gets in the comedy scene. Born in Boston, MA and raised in Stockton, CA… A United States Marine with a WebMD diagnosed classic case of middle kid syndrome, he’s the funniest of 9 children raised by immigrant parents from Panama. It’s complicated. And now Ellis has become one of the the best Stand Ups on the scene today, becoming a veteran of the NorCal comedy scene especially. His energy and charisma have made him a regular headliner at The Improv, Laugh’s Unlimited, Punchline, and Tommy T’s to name a few. He’s also performed on the Shaq’s All Star Comedy Jam, and Laugh’s on FOX. He’s been a finalist at the Las Vegas World Series of Comedy, NBC’s Stand up for Diversity, & Comedy Central’s UP NEXT. Most recently Ellis made his television debut when he was featured on Kevin Hart’s new Comedy Central show ‘Hart of The City’. He is the reigning Champ of the San Francisco Comedy Competition, and the San Diego Comedy Festival. Ellis Rodriguez is coming to a club near you! Don’t miss your chance to laugh when Ellis Rodriguez comes to your city!

With Aurora Singh- Some call her a rare breed, I would agree- Aurora Singh blessed her immigrant parents with her arrival into the world in January 1992 and continuously doused her sparkle upon the world as she grew up in Sacramento, California in the good ol’ Catholic school system. You won’t regret the deep belly laughs you experience as a result of her hilarious straight forward real comedy. Seven years of comedy on her belt performing with great names like Kabir Singh (Kabeezy), Joey Diaz, Steve Simone, Taylor Tomlinson, and Felipe Esparza! Her mom has even been quoted saying, “she’s hilarious!” Ready to ride the giggle train? You won’t be disappointed!Hosted by Chris Fernandinson- Santa Rosa's own funny guy wil guide us through the evening 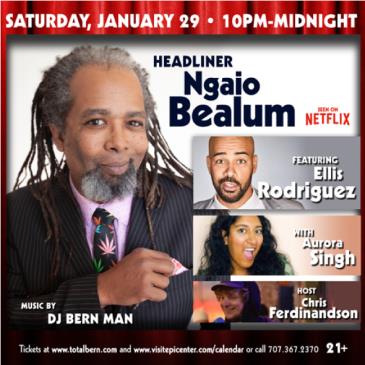