South Korea’s genre-challenging boy band ONEUS is coming to Houston to meet their fans through their 2022 ONEUS TOUR ‘BLOOD MOON’ on March 7 at WHITE OAK MUSIC HALL. It’s not the 6-member group’s first stateside tour, as they successfully held their first 2019 ONEUS ‘FLY WITH US' TOUR in the U.S. back in November 2019.

Over two years since their last tour in the U.S., ONEUS is ready to take the big stage again with live music and show-stopping performances. An all new setlist showcasing an expanded discography that will leave fans breathless awaits.

Debuted under RBW Inc., the agency that houses one of the biggest Korean girl groups of all time, MAMAMOO, ONEUS has gained worldwide attention from the very beginning.

After their debut in January 2019, the sextet quickly became K-pop heartthrobs with their striking physical appearances and vocal prowess. Their debut mini-album “LIGHT US” hit no.1 on iTunes Top K-Pop Albums Charts and charted within the Top 10 in Canada, Germany, England, Spain, and Italy. Its title track “Valkyrie” garnered over 32 million views on YouTube, an impressive feat for a rookie group.

Despite the restrictions caused by the pandemic, ONEUS started the year strong with the release of their first single album “IN ITS TIME” and its ballad title track “A Song Written Easily,”showing off their musical adaptability and genre versatility.

They continued on their perfect streak by releasing their fourth mini-album “LIVED,” and the title song “TO BE OR NOT TO BE”. This further showcased the band’s powerful charms, while taking a twist on an old-times classic Hamlet narrative. They closed off 2020 with yet another banger: “BBUSYEO”, a song that expresses the exciting and heart-fluttering feelings experienced by boys who have fallen in love.

January 2021, saw the release of their very first album “DEVIL” and the title song “No Diggity” peaking at number 18 on the Billboard World Digital Song Sales Chart, marking their place among top artists.

With the release of their fifth mini album “BINARY CODE” in May, featuring their Michael Jackson inspired song “BLACK MIRROR”, the group showed the true meaning of limitless talents as they dominated music charts throughout the month.

ONEUS threw music fans in for another loop when they released their sixth mini album “BLOOD MOON” in November, breaking their own personal records in sales to charting in both domestic and international music charts.The group is exponentially growing in success and does not see an end, even grabbing their first trophy win on a domestic music show with their latest title track “LUNA”. With all the achievements under their belt, they’re ready to reconnect with their fans.

Please note: Due to COVID-19 pandemic circumstances, the event status is subject to change. 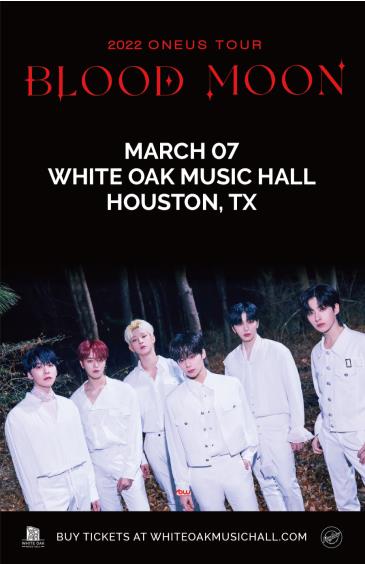