Be good to each other!

Okilly Dokilly
http://www.okillydokilly.com/
Okilly Dokilly,the world’s only Nedal band is announcing the ‘Tourdilly Do ‘22’ tour and it willbe their last for a while.TheTourdilly Do ’22 tour will take the place of the rescheduled ‘When the Comet Gets Here’tour with shows occurring across the Midwest and Eastern US from April to May of 2022.Following the tour, the band will be officially announcing an indefinite hiatus.After 6 years ofexistence, 2 albums and several national and international tours, the band will be taking sometime to focus on family and other projects.Lead singer, Head Ned said about the band’s history, “When we started Okilly Dokilly, our goalwas to play, like, 2 shows. We imagined being the 2ndor 3rdband on one of those 7 band metalshows. We would step out in our sweaters and confuse the 12 or 13 people in attendance, andthen have a great story. None of that came to fruition, except the great story.”The band went viral in August of 2015, before ever playing a show. In one week, they amassedthousands of social media followers, had millions of streams on their bandcamp page andlanded as the top trending topic on both Reddit and Facebook. In2019, the band landed andeven bigger honor, when their music video for ‘White Wine Spritzer’ was broadcast during thecredits of a Season 30 episode of The Simpsons.“Okilly Dokilly did way more than I ever expected,” said Head Ned. “I’m really gratefulfor all thepeople who have been part of it. And especially to everyone who came out to our shows to sayhowdilly doodilly. For me,it’s time for a break. We’ve been touring pretty relentlessly since2016 and, last year,I became a dad. It’s time to shaveoff the Ned mustache and grow the dadmustache.”The ‘Tourdilly Do ‘22’ tour will serve as a ‘going away’ tour for the band, but likely won’t be apermanent end. Head Ned said about the band’s future “We just want to let everyone knowthat we won’t be touring or making any new music in the next few years. I’m not sure whenwe’ll be back, but for now, it’s ‘toodilly do’.” 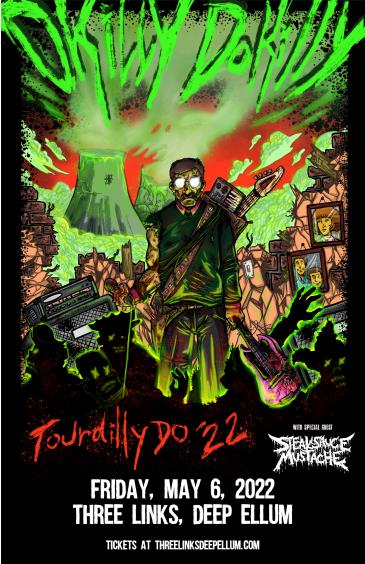