“Somehow what we’ve got never breaks down,” Rhett Miller sings on Old 97’s exhilarating new album, ‘Twelfth.” At first, the line comes off as a boast, as a declaration of invincibility from a band that’s managed to survive three decades of rock and roll debauchery, but as the phrase repeats over and over again, it slowly transforms into something more incredulous, something more vulnerable, something deeply human.

“We experienced some close calls over the last few years,” says Miller, “and I think that led us to this dawning realization of the fragility of it all. At the same time, it also led us to this increased gratitude for the music and the brotherhood we’ve been so lucky to share. I think all of that combined to make recording this album one of the most intensely joyful experiences we’ve ever had as a band.”

That joy is utterly palpable on ‘Twelfth.’ Loose and raw, the record is an ecstatic celebration of survival, a resounding ode to endurance and resilience from a veteran group that refuses to rest on their considerable laurels. Working out of Sputnik Sound in Nashville, Miller and his longtime bandmates—bassist Murry Hammond, guitarist Ken Bethea, and drummer Philip Peeples—teamed up once again with GRAMMY-winning producer Vance Powell (Chris Stapleton, Jack White), and while the resulting album boasts all the hallmarks of a classic Old 97’s record (sex and booze, laughter and tears, poetry and blasphemy), it also showcases a newfound perspective in its writing and craftsmanship, a maturity and appreciation that can only come with age and experience. Perhaps the band is growing up; maybe they’re just getting started. Either way, Old 97’s have never been happier to be alive.

Formed in Dallas, Texas, Old 97’s first emerged in the early ’90s with an adrenaline pumping blend of rock and roll swagger, punk snarl, and old-school twang that quickly brought them into the national spotlight. Conventional wisdom places the band at the forefront of a musical movement that would come to be known as “alternative country,” but, as the New York Times so succinctly put it, their sound always “leaned more toward the Clash than the Carter Family.” Fueled by breakneck tempos, distorted guitars, and wry storytelling, the foursome built a reputation for high-energy albums and even higher energy shows, earning themselves performances everywhere from Conan and Lettermanto Bonnaroo and Lollaplooza alongside countless rave reviews. NPR lauded the group as a “pioneering force,” while Rolling Stone hailed their music’s “whiskey-wrecked nihilism and slow-burn heartbreak,” and The New Yorker praised their songwriting as “blistered, blasted, and brilliant.” On top of his prodigious output with Old 97’s, Miller simultaneously established himself as a prolific solo artist, as well, releasing eight studio albums under his own name that garnered similarly wide-ranging acclaim and landed in a slew of prominent film and television soundtracks. A gifted writer beyond his music, Miller also contributed essays and short stories to The Atlantic, Salon, McSweeney’s, and Sports Illustrated among others, and in 2019, he released his debut book, a collection of poetry for children, via Little, Brown and Company.

While part of Old 97’s charm has always been the air of playful invulnerability they exude onstage every night, reality began catching up with the band in 2017. The night before a television appearance in support of the group’s most recent album, ‘Graveyard Whistling,’ Peeples collapsed in a hotel parking lot, falling backwards and cracking his skull on a concrete abutment. He spent weeks in the ICU and was forced to miss the first leg of tour. Bethea, meanwhile, began to notice a loss of feeling in the fingers of his right hand. As his condition continued to deteriorate on the road, the numbness spread to his leg, and he was eventually forced to undergo spinal surgery in order to regain full motor control. Miller, for his part, found himself at more of an existential crossroads, questioning attitudes and behaviors he’d long taken for granted. Yes, he was a rock and roll star (whatever that means nowadays), but he was also a father and a husband, and he decided it was long since time to get sober.

“Back when we were in our 20’s, we put ourselves through these terrible trials because we thought we could survive anything,” says Miller. “But over the last few years, it started becoming clear that we’re human.”

Rather than slow things down, the band decided to embrace their mortality as all the more reason to seize the day. Life is short—a lesson that was hammered home on the group’s first day of recording in Nashville, when a series of deadly tornadoes ripped through town—and ‘Twelfth’ is the sound of Old 97’s recommitting themselves to making the most of every moment they’ve got left. Addictive opener “The Dropouts” sets the stage, taking stock of the band’s journey from its very first days, when they cut their teeth playing the bars of Deep Ellum in exchange for pitchers of beer and pizza. Like much of the record to come, it’s a nostalgic look back on simpler times, but it smartly avoids looking at the past through rose-colored glasses, instead recognizing that change is neither inherently good nor bad, only inevitable.

“There’s a line about sleeping on hardwood floors in that song,” says Miller, “and that’s what we did in the early days. But that image of hardwood floors keeps coming back and building on itself in different songs throughout the album, and over time it begins to mean different things as we grow up and start families and own homes.”

Miller has a knack for capturing those sorts of little details that tell a larger story, for crafting richly cinematic scenes that transform seemingly mundane moments into metaphors for life itself. The driving lead single “Turn Off The TV,” for instance, spins a free cable hookup into a celebration of the visceral pleasures of living in the present, while the larger-than-life “Diamonds On Neptune” turns an astronomical phenomenon into a meditation on what really matters, and the waltzing “Belmont Hotel” finds emotional symbolism in the restoration of a Dallas landmark.

“‘Belmont Hotel’ is a microcosm of the album, and of our band,” says Miller. “When we first started out, the Belmont was in absolute ruins, and we even did a photoshoot in the empty parking lot. Now, though, it’s more beautiful than it was in its glory days, and that got me thinking about the way we approach our relationships. Whether it’s a friendship or a marriage or a band, it’s inevitable that you’re going to go through ups and downs, but if you’re willing to put in the work and stick out the hard times, you can wind up with something that’s better than it ever was before.”

While Miller collaborated with writers like Butch Walker and Nicole Atkins on ‘Graveyard Whistling,’ he penned everything on ‘Twelfth’ himself (outside of the Spaghetti Western-esque “Happy Hour” and hypnotic album closer “Why Don’t We Ever Say We’re Sorry,” which were both written and sung by Hammond). It’s a return to form he credits in part to his increasing comfort with sobriety, a comfort that finds him effortlessly running the gamut from playful romance (the dreamy “I Like You Better”) and brash bravado (the blistering “Confessional Boxing”) to supernatural fantasy (the Kinks-ian “This House Got Ghosts”) and old-school twang (the rollicking “Bottle Rocket Baby”). It’s perhaps the jaunty “Absence (What We’ve Got)” that captures this particular moment in Old 97’s history best, though, as Miller marvels at the way things change while staying the same. “The wine turns into whiskey And the whiskey turns to tears It’s been this way for years,” he sings, later summing the whole magic act up with a deceptively simple confession: “This is what I do.”

Old 97’s may be human, but somehow what they’ve got never breaks down.

Vandoliers are the next wave of Texas music. The six-piece Dallas-Fort Worth group channels all that makes this vast state unique: tradition, modernity, audacity, grit, and— of course—size. Forever puts it all together for an enthralling ride down a fresh Lone Star highway.

One of those mentors is fellow Dallas-Fort Worth musician Rhett Miller of Old 97’s. The influence and tutelage of Miller and his bandmates helped sharpen Vandoliers’ Texas - bred, roots-based punk rock.

“Before the band started diving into the new material, I sent Rhett a bunch of acoustic phone demos,” says Fleming. “Being the amazing person he is, he sent me back a 3,000- word email of advice that read like a master class in the art of songwriting. Beyond their influence musically, they’ve really taken us under their wing, letting us play shows with them and giving us all kinds of advice along the way.” 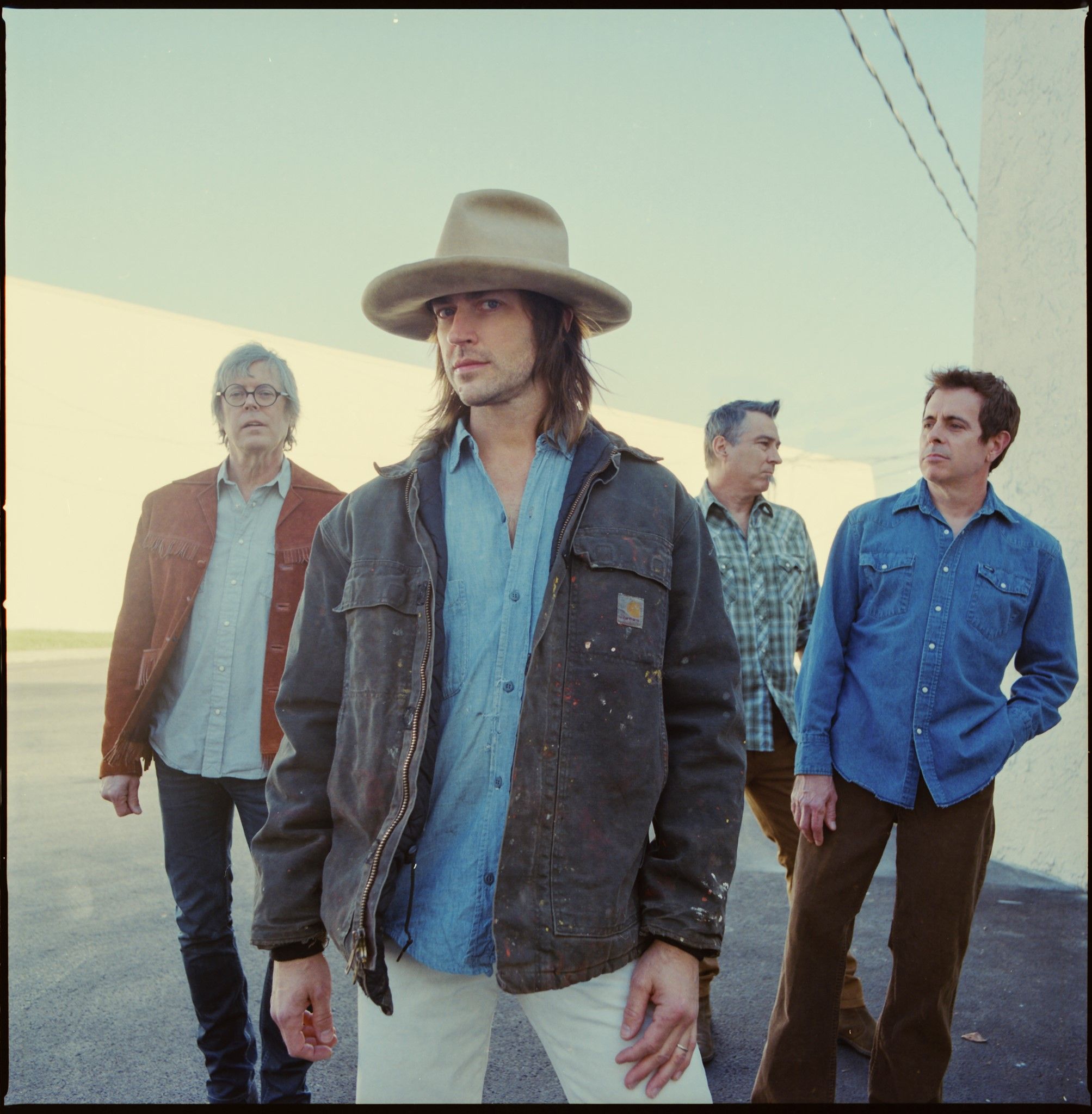