Bio:
“Make no mistake: young DC rockers One Way Out can fill a room.” One Way Out is an dirty shirt rock n' roll band from Washington D.C., packing venues in their hometown, touring with Soraia of Steven Van Zandt's Wicked Cool Records, and being nominated for Best Hard Rock artist in D.C. alongside names like Clutch before most members even graduated high school. “Not only can they pack a room full of fans but they can play like seasoned champs, filling a space with the sound of rock ‘n’ roll.” Known for their eclectic style -- a meld of blues-inspired late 60s rock (Led Zeppelin, The Doors) with progressive elements inspired by metal, hard rock, and jazz -- the band also takes on the aggression of punk emanating from the local DC scene and the philosophies of more modern acts, such as King Gizzard and the Lizard Wizard, Oh Sees and Tame Impala, giving them "a strong 70's vibe mixed with a modern songwriting style." Other artists that have inspired the band are The Eagles, James Taylor, and blues legends such as B.B. King and Muddy Waters.

One Way Out has received six finalist nominations at the Wammies (Washington Area Music Awards) for Best Rock Album, Best Hard Rock Album, Best Hard Rock Artist, and Best Hard Rock Song. After embarking on their first tour in support of their debut album "Cosmic Beat" (2019), they returned to the studio with Ben Green (Fairweather) to record "Black Walls". Released on February 28th, 2020 to a jammed house at Union Stage, the single featured The Stooges' 1970 cult classic “Down on the Street” on the B-Side, showing that they are not just a group of pretty faces with their heaviest single. Through the fall of 2019 and the spring of 2020, the band spent countless hours with Green crafting their next project, which after a five month hiatus due to coronavirus restrictions, was completed in September 2020. Off of this upcoming record, "Black Lungs (and a Broken Heart)", the most experimental track in their catalogue, was released on January 1st, 2021, and "Red", a blues-rock reflection on the isolation of the coronavirus pandemic, followed on March 12th.

One Way Out has played shows all around the East coast — at venues in their hometown of D.C. such as Union Stage, DC9 Nightclub, The Pie Shop, Tally Ho Theater, Rock & Roll Hotel, MilkBoy Arthouse, and Villain and Saint — as well as in New York City and Philadelphia. The band formed in 2012 with Josh Gaba (Lead Vocals), Jake Schaefer (Lead Guitar), and Giulio Iacoviello (Bass Guitar) being the three remaining original members. After a year, Geist Topping took over as the drummer, and in 2015, Ari Rubenstein (Keyboard) joined the group.
Links:Official Website: www.onewayoutmusic.net
Listen: onewayoutmusic.bandcamp.com
Watch: https://www.youtube.com/watch?v=17C2UuAdLqE
Instagram: www.instagram.com/onewayoutmusic
Facebook: www.facebook.com/onewayoutmusicDCTwitter: https://twitter.com/onewayoutmusic
One Way Outwww.facebook.com/onewayoutmusicDC 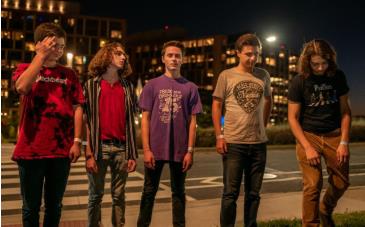