Will Call Opens/Seat Assignments Begin: 6PM | Doors Open For Drinks: 7PM | Showtime: 8PM
When you arrive at Will Call on the night of the show, seats will be assigned first come first served, from the front of the theatre to the back. If you want to sit closer, be sure to come earlier.

“For their most flamboyant music takes place/When their wings are stretched/Above the trees/And they are smoking the opium of pure freedom.”

The words come from the poem by the great Sufi poet Hafiz, who insisted: “The bird’s favorite songs/You do not hear,” but Opium Moon’s Grammy-nominated, self-titled debut album allows this hidden music full flight.At once timeless, ancient but modern, a journey from the heart of four individual musicians created in the present moment, ethereal and earthy,multi-ethnic and inclusionary, its five extended tracks defy categorization.

Opium Moon is a fever dream, a once-in-a-lifetime collaboration seemingly destined to take shape. Its participants come from allover the globe, a veritable world music superstar team. The four principals cohere as a single entity with a fused musical soul -- Iranian santoor maestro Hamid Saeidi, sought-after Israeli bassist Itai Disraeli and wife, Canadian-American violin virtuoso and film composer Lili Haydn, along with U.S.-born M. B. Gordy, a go-to percussionist who’s worked with such award-winning movie composers as Hans Zimmer, Alexandre Desplat, and Marco Beltrami (where he reconnected with Haydn while working on a live version of his Oscar-nominated “3:10 to Yuma” score).

Says Haydn: “This is cool on so many levels, but the best part is it was done with no thoughts of being commercial in any way.”

“This is not about artists chasing what we think the public wants,” adds Itai Disraeli. “To me, the New Age category represents a new era of making music without the constraints of the marketplace, something with lasting value, not just for today, but the end of time. As artists, it’s our job to offer the possibilities that can define our future lives.”

Opium Moon is the perfect reflection of a music that can’t be pigeonholed, debuting on four separate Billboard charts,including Heatseekers, Classical, Classical Crossover and World Music. As one Amazon.com admirer put it, “This is World Music from another world.”

NPR Music’s Bob Boilen said, “It’s a rare pleasure to find music that gives me pause, slows me down from the daily deluge and gives me a moment to think… Spacious and timeless.” KPCC’s Steve Hochman called it “the soundtrack to an exotic, hazy, languorous dream, a sensual/spiritual trip into the mystic,” while Common Ground’s Lloyd Barde raved, “It’s been quite sometime since such a thoroughly enticing, alluring and totally engaging album has come my way.” ArtNowLA’s Victoria Looseleaf said, simply, “A sublime and sensual brew… that transports the listener to a musically soulful Shangri-La.”

Haydn points out that one of the inspirations for Opium Moon lies in the 1967 iconic album,Call of the Valley, a classic work featuring noted Indian musicians Hariprasad Chaurasia and Shivkumar Sharma. “I always wanted to make an album that made me feel like that,” she says. “And it happened organically when I collaborated with these three exquisite musicians.”

The process occurred naturally, starting with a jam session featuring Lili, Itai and Hamid Saeidi, an acclaimed Iranian musician who was one of his country’s leading film and TV composers before arriving in the U.S.nine years ago.

“We are not trying to copy anyone,” says Saeidi, only the fourth musician from Iran to ever receive a Grammy nomination. “I’m trying to get connected not just to my soul, what is inside me, but what’s in the souls of three other people.  That’s why it’s both very free and not so free at the same time. We come from very different cultures but have found common ground. We trust and respect one another. If someone brings up an idea in the moment, everyone will follow that.  There are no egos here.”

M. B. Gordy agreed. “I’m just digging the ensemble aspect,creating a vibe, a mood, telling a story. It’s very sensuous and slinky,transformative. We call it Kama Sutra music. You can do anything you want to it.”

Haydn has released five solo albums, scored 15 feature films and collaborated over the years with the likes of Herbie Hancock, George Clinton’s P-Funk, Roger Waters and Sting, as well as performing a memorable version of “Kashmir,” then touring as the opening act with Jimmy Page and Robert Plant. She recently presented her fourth TED talk, accompanied by a30-person multi-ethnic choir in Kansas City. “I am a man, I will be counted” is the refrain, and it’s one Lili takes very seriously in these treacherous political times.

“Opium Moon is everything each of us exemplifies in this music,” she says. “The freedom, the give-and-take, the respect, the deference,the harmony, the joy, sometimes even the cacophony.  We all bring our personal strengths to this music.  We reinvent ourselves every time we play it.  The whole is just so much more than the sum of the parts.  We share the credit. It’s a communal enterprise, a family affair.  We celebrate the fact it doesn’t have a traditional song structure. The record is unpredictable; it goes to places none of us could have imagined, borne of our willingness to channel and be led by our collective muse, while not suffering the tyranny of song.”

Indeed, the unexpected Grammy nomination has now offered validation for that creative risk and somehow encouraged them to continue on this path.

“This was a huge sign for me,” says Saeidi. “It came at a time when I was questioning myself and had doubt.  But this offers affirmation for the modern-day generation of Iranian musicians to break away from the traditional,and to experiment.”

For Haydn, the Grammy nomination allows her to pay tribute to her late mother, Lotus Weinstock, the first female comic to headline the Comedy Store, a contemporary of Jay Leno, Jerry Seinfeld, and Bill Maher, who never achieved mainstream recognition, but served as a spiritual role model for similar characters in The Marvelous Mrs.Maisel and I’m Dying Up Here.

“I learned early on that talentdidn’t necessarily equate to success,” says Lili. “My mom once told me, ‘The only thing that’s fair is between you and your creation.’ This music is so authentic and pure, played straight from the heart, that I can listen to it and forget that it’s me.  It’s soul-edifying to have something like this be recognized. I’m sure my mom is kvelling from heaven.”

“To be acknowledged like this sends a powerful message,”concludes Itai, “Both for us as individuals, and everyone who listens to this album, that real music played from the heart in freedom, creates something both timeless and yet happening in the now, and points the way to a more inclusive,loving  future.”

Opium Moon. World music from another world which just might change history. 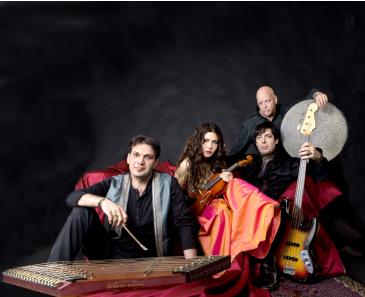