Processing...
Tickets
Tickets will be available at the door for $20

Led by Bulgarian-born performer-composer Milen Kirov, Orkestar MÉZÉ is an international musical powerhouse based in Los Angeles, California. Since 2011 this 11-piece ensemble has gathered a large following through their raucous, joyous live shows where fans of all ages and walks of life dance to the band’s original high-energy style called "peasant funk.” Featuring a powerful 6-piece horn section, the band’s unique sound is a mix of classic American funk and soul with fiery traditional Bulgarian odd rhythms and slippery modal melodies sprinkled on top with musical spices from NOLA, the Balkans, hip-hop, rock, jazz, and gospel music.​

The band’s debut album "Peasant Funk" was released on November 11, 2011 to rave reviews by critics and audiences on both sides of the Atlantic. Online and print media have enthusiastically embraced the record calling it "a magician's hat that you can reach into and pull out anything your heart desires" and "a musical concoction that is equally appetizing to the refined music connoisseur and to the enthusiastic casual listener.”

Orkestar MÉZÉ released their eagerly anticipated self-titled sophomore record on June 16, 2015. Special guests featured on the album include “The Ambassador of Soul” Ellis Hall (Tower of Power, Ray Charles), the Bulgarian kaval virtuoso Theodosii Spassov, Miroslav Tadic - one of the most unique and celebrated guitarists of our time, and the legendary Bulgarian composer, musicologist, and gadulka performer Todor Kirov. The single “Love Revolution” featuring the voice and keyboards of the incomparable Ellis Hall has been picked up by radio stations from the US to New Zealand and the band is gathering more and more attention and fans from all corners of the world. 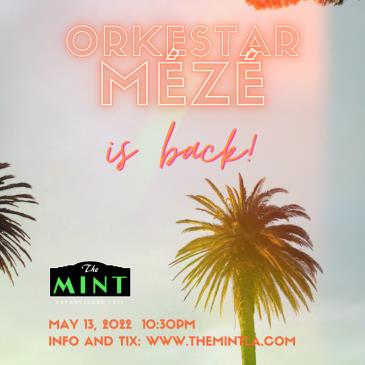