We’re back! It should go without saying that the past 15 months have been awful, easily the biggest struggle our generation has ever faced. The music industry in particular was absolutely obliterated. Concerts were completely wiped off the map. Many bands have broken up from the inactivity and are not getting back together. All of the incredible venue and touring personnel have barely squeaked by, and some won’t be returning to the industry after being shell shocked by the effect the virus had on the live music world.

So what do we do now?

There’s only one thing we can do: we come together and build concerts back up. It will be a process. It will not happen overnight. But when it’s all said and done, we will overcome.
Our Scene United has long existed as the brightest beacon of shining light we have conjured up on a yearly basis in an effort to showcase Memphis music. It felt right to return from this long break with Our Scene United 2021. We are revisiting our 2017 format this year: only three nights, no afternoon schedule, just a handful of fantastic bands per night. We are particularly excited to have Thursday, July 22 as our “New Bands Night” - all bands that night are either debuting or playing their second show. 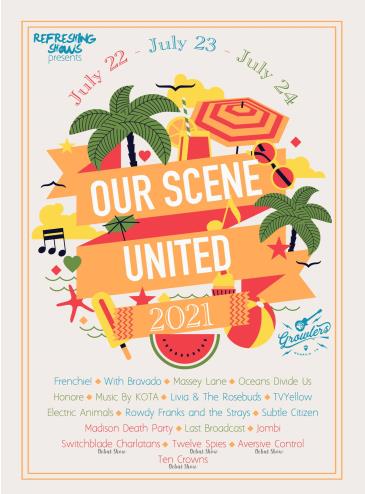