Headliner:
Houston music documentary 'Outside of Austin' brings together the city's top talents for a one night fundraising event. Come out January 3rd and be a part of the experience.
G. W. Films, in collaboration with Prometheus Rex Films, presents Outside of Austin, a documentary film that journeys into the Houston, Texas indie rock scene like never before - spotlighting the troubles, triumphs, and daily grind of being a working musician in one of the most diverse cities in America. Directed by Gavin Cody Wegener, produced by Colin C. K. Njemanze, Gavin Cody Wegener, Brian Riley and James Lino, featuring The Wheel Workers, Velveteen Echo, Mantra Love, Lyta, Rex Hudson, Space Kiddettes, Bernie Pink and many more in revealing interviews and stunning stage performances. Outside of Austin filming now. 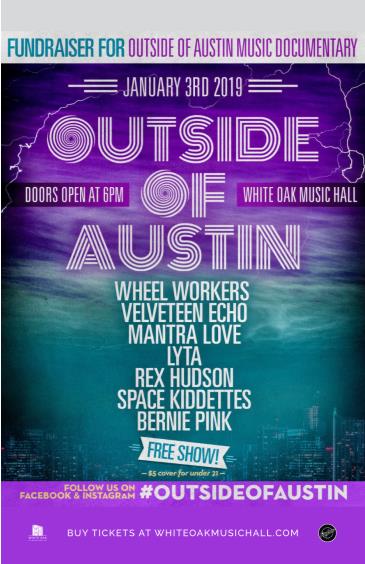