OVERTIME at High Dive FRIDAY, October 1st! In Person Show + Live Stream! Come watch with us or watch from home at HighDiveGville.VEEPS.com

Coming off of the successful album release for "Divided We Fall", OverTime sets out with his band on his 20th U.S. Tour! After back to back Billboard charting albums, the momentum is swinging in OverTime's favor. Catch one of the fastest growing artists in the independent circuit live in concert! You'll get a mixture of country, rock, and hip hop with his Blue Collar Soldiers Band playing behind him.

OverTime is high energy, patriotic and as down to earth as it gets! 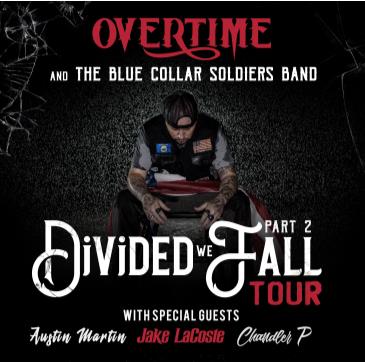