Spin Cycle Presents at The Mint

Processing...
Tickets
This Show is  SOLD OUT

Due to rising concern over the Delta Variant, the members of “Paradise Waits - an evening of Grateful Dead Music” are now requiring that their show at The Mint have specific safety protocols in place to keep everyone in attendance as safe as possible. This specific event will limit attendance for this show to 75% capacity, and, upon entry to the venue, audience (and band/staff) members will be required to show proof of vaccination or a negative COVID test received 72 hours or less prior to showtime. Masks will be required, when not actively eating or drinking, of course!

It should be stated that this decision was not made by the venue or the promoter. We realize that some folks may not agree with this decision and for those folks we apologize for any inconvenience and are offering refunds through September 11th. To request a refund, simply email marketing@themintla.com with your name and how many tickets you purchased.

Conversely, for those interested in purchasing tickets, with the new protocols in place, a limited amount still remain at https://bit.ly/tix_paradisewaits

Thanks for your cooperation in keeping music – and each other – thriving in Los Angeles.

For an easy way to get your vaccine record on your phone, simply click here: https://bit.ly/DigitalCOVID19VaccineRecord

Doors at 8pm
This show will REQUIRE proof of vaccination (or negative Covid test within 72 hours of entry).
If you have already purchased tickets for this event and prefer not to attend because of these requirements, please email help@seetickets.com by September 11thfor a refund and include your order number.
Spin Cycle Presents
"Paradise Waits" an evening of Grateful Dead music featuring members of Dark Star Orchestra and Cubensis.
Featuring members of:

Performing to critical acclaim for over 20 years and over 3000 shows, Dark Star Orchestra continues the Grateful Dead live concert experience. Their shows are built off the Dead's extensive catalog and the talent of these seven fine musicians. On any given night, the band will perform a show based on a set list from the Grateful Dead's 30 years of extensive touring or use their catalog to program a unique set list for the show. This allows fans both young and old to share in the experience. By recreating set lists from the past, and by developing their own sets of Dead songs, Dark Star Orchestra offers a continually evolving artistic outlet within this musical canon. Honoring both the band and the fans, Dark Star Orchestra's members seek out the unique style and sound of each era while simultaneously offering their own informed improvisations.

Since 1987, Los Angeles-based band CUBENSIS has carried the torch in celebration of one of America’s most beloved touring bands, the Grateful Dead. CUBENSIS brings the Grateful Dead concert experience back to life. Drawing from all eras of the Dead, the band performs full sets of Grateful Dead and Jerry Garcia Band classics that retain all the spontaneous exploratory jamming for which the bands were renown. However, the music produced is uniquely Cubensis.

The group has been acclaimed for giving new life to the Grateful Dead’s material, bringing in new styles, new innovations, and new jam band enthusiasts, while at the same time remaining loyal to the original music and the original fans. The band is a study in ensemble playing, and its members feed off each other’s energy, pushing one another into high gear with integrated parts that answer and complement the other.

Spin Cycle Presents is a music and events promotional company that focuses on building the Southern California jam band community, deriving its sound from The Grateful Dead and Phish cultures, but also branching out to other distinct genres such as psychedelic rock, reggae, funk, folk, blues, electronica, bluegrass, jazz, fusion and world music. 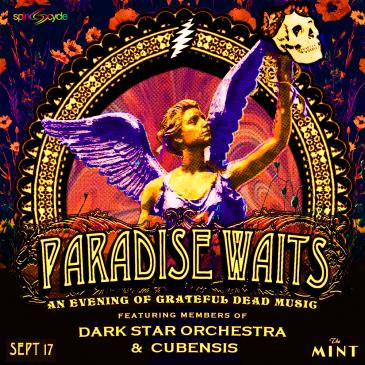