Madonna is on tour and with a night off in SF...
Madonna's Keyboardist is bringing his own "PARLOR SOCIAL" (#Prohibitionfunk) band to take the stage for an Exclusive SF Show at Boom Boom Room...


PARLOR SOCIAL
"Not so much ragtime revivalists as post-hip-hop ragtime redefiners, this duo takes the old-school showmanship of Cab Calloway and beefs up the catchy speakeasy jive with throbbing electronics, all the while adopting a heavy dose of neo-soul. The buzz also tells us that this is a must-see live act." The Montreal Gazette, July 2017
Voted twice one of ‘Hot 100 Unsigned Live Artists and Bands in the USA’ by Music Connection, PARLOR SOCIAL is fronted by Montreal-bred, LA-based, husband and wife team Dessy Di Lauro (vocals) and Ric’key Pageot (piano).  With their library of original songs, Dessy (Cirque Du Soleil) provides sultry vocals that flawlessly encapsulate the spirit of Uptown’s early 20th Century cultural boom through the prohibition era yet offers a timeless approach that’s all her own. Serving as musical director and pianist/ accordionist, Ric’key (Madonna) is either playing the squeezebox or tickling the ivories with an affable buoyant stride that promotes the infectiously festive atmosphere of their concerts.  Their music pays tribute to the Harlem Renaissance classics, combined with a present-day sound. Catch their unforgettable show for the first time in San Fran with their full band at Boom Boom Room as part their 'Not Giving Up On You' tour.

Madonna has kicked off her #MadameX tour and she’s joined by Ric’key Pageot, her longtime pianist and accordion player. This is Rick’s 4th world tour with Madonna and on days that Rick is not performing or practicing, he and Dessy Di Lauro, his wife will be playing a number of Parlor Social shows across different cities.

On this their ‘Not Giving Up On You Tour’ It’ll be a night of #SpeakeasySoul and #ProhibitionFunk by Rick, Dessy, and some very SPECIAL guests! Tickets are just $15. Get yours today. 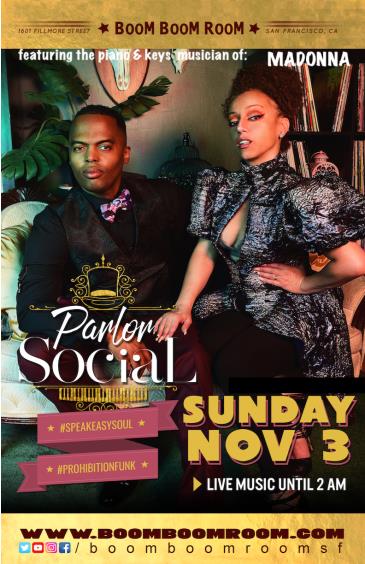