*The PEARL CHARLES / MICHAEL RAULT tour has been canceled due to unforeseen circumstances. We will be issuing refunds shortly.*

Pearl Charles has been playing music since she was 5 years old. At 18, she formed country duo The Driftwood Singers with Christian Lee Hutson, singing and playing guitar and autoharp. At 22, she joined garage rock band The Blank Tapes as drummer. After two fun-filled years immersed in the rock and roll lifestyle, she decided it was time to pursue her own songwriting, and began developing the songs that formed 2015′s eponymous debut EP. In 2018, Pearl released debut album, Sleepless Dreamer, which Rough Trade described as "The best country pop we've heard in years" and Buzzfeed called her "A modern June Carter meets Lana Del Rey."  With the upcoming release of the follow up, Magic Mirror, out January 15, 2021, Pearl leans into furthering her own brand of country-disco. "As if Tom Petty were riding shotgun, Charles and band capture a certain Southern California essence” – LA TIMES https://pearlcharlesmusic.bandcamp.com/

Michael Rault is a Canadian born singer-songwriter, multi-instrumentalist and producer. Born in Edmonton, Alberta, Rault left his hometown in early adulthood to enmesh himself in the music scenes of first Toronto and then Montreal, before most recently relocating to the USA and the California Mojave desert / Joshua Tree area. Rault’s 2nd album with the Wick imprint is currently finished and awaiting release, likely in the new year.  Recorded before and during the Covid 19 pandemic and societal shut down, the release date has yet to be announced, but we can tell you that the album is a continuation of Rault’s increasingly deeper exploration of the worlds of progressive pop, psych folk, yacht rock and “too slow to disco” drug fueled dance floor slow steppers. https://michaelrault.bandcamp.com/ 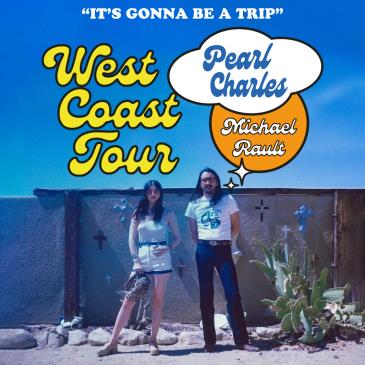