POGUETRY - Songs of the Pogues

POGUETRY - Songs of the Pogues

The Pogues emerged out of London in the early 1980’s, playing an incendiary music that merged punk rock ferocity and Irish lyricism, an intoxicating rush of accordions, banjos and tin whistles driven by a locked tight rocknroll rhythm section that gathered lifelong fans along the way including Tom Waits, Bob Dylan and The Clash’s Joe Strummer, who even fronted the band for a while.

The band’s original bass player, the fabled Rocky O’Riordan, went her own way shortly after the release of the band’s second album but has now reunited with founder member, tin whistle player and sometime singer Spider Stacy in Poguetry, bringing you the songs of the Pogues, backed by Louisiana’s own, Grammy winning Lost Bayou Ramblers, the finest Cajun band on the planet, who add their own inimitable fire and fury to the affray.

Spider and the Ramblers have been playing together since 2015, and in 2018 added bassist Cait to the mix after they met again at Shane MacGowan’s 60th birthday celebrations in Dublin that year and he discovered she was living in New York.

Spider relocated to New Orleans 13 years ago whilst he had a small part in HBO’s Treme and has since been working on a Pogues Musical with The Deuce and The Wire team David Simon and George Pelecanos, and NYT best selling author Laura Lippman.

“I saw the Ramblers play back in 2011 and immediately recognized them as kindred spirits,” says Stacy. “I felt they'd be a fantastic vehicle to give the old songs some new life. I'm not ready to stop playing live but at the same time I don't think the world needs any new music from me, so this works nicely. Bringing Cáit in just took us up another level”

This pairing has given stand-out performances at the New Orleans Jazz & Heritage Fest, Lafayette's Festival Internationale and raucous annual Christmas shows at Tipitina’s in New Orleans.

Lost Bayou Ramblers just celebrated their 20th anniversary as a band. Deeply rooted in the traditional Cajun culture they were born into and raised in, their stated mission is to preserve that culture and promote it by using it as the basis for some of the most visionary, yet blood stirring music being made today with recent studio albums being produced by LCD Soundsystem member Korey Richey.

Size and then for director Brian C Miller Richard's feature film Lost Bayou. Previously they’d contributed to the score of the Oscar-nominated Beasts Of The Southern Wild.

The Ramblers will be opening with their own set before the show blends into the songs of the Pogues. I hope you’ll consider advancing their show with a feature, preview or advance blurb. 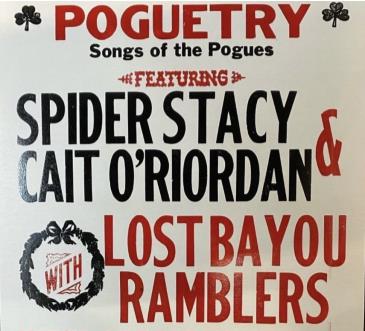