Pinkshift aren’t an apologetic band. In fact, they’re a heavy, vehemently unapologetic punk band whose songs rail against prejudice and oppression while also examining in great depth the human condition.  And yet Love Me Forever, the Baltimore, MD trio’s debut album, begins with an apology. ‘I’m so sorry that you’re seeing me this way’ spits Ashrita Kumar (they/them) at the start of opener “i’m not crying you’re crying”, the first five syllables unaccompanied by music until the rush of guitars and drums – played by Paul Vallejo (he/him) and Myron Houngbedji (he/him) respectively – kicks in and the song accelerates into a frenzy of raw, ragged emotion (and denial thereof). From there, it’s a breakneck journey into the heart, soul and mind of a band that, clearly, have a lot to get off their chest, and who do so just as viscerally as they do emotionally. It makes it even more remarkable, then, that it all began with a Britney Spears song. Back in 2018, Vallejo happened to catch Kumar – who he’d never met before – singing a cappella with a group at Johns Hopkins University. On the strength of that, he asked if they wanted to sing on a cover of “…Baby One More Time”, “There was a group at our school,” adds Kumar, “that would put on music stuff, because our school didn’t have music things unless you played classical music. I love pop music so much so when Paul suggested the cover, I was like ‘Fuck yeah!’

That ‘Fuck yeah!’ became, accidentally, the foundations of the band, and was quickly followed by Houngbedji joining the band – after the other two heard him drumming My Chemical Romance’s “Helena”, knocked on the door and convinced him to join. And while Love Me Forever sounds nothing like either Britney Spears or My Chemical Romance, Pinkshift aren’t afraid to hide their love of pop music or other influences, from grunge to post-hardcore and beyond. In fact, it’s in full force across Love Me Forever’s 12 blistering songs. Yet to reduce the band’s sound to just its inspirations is to do Pinkshift a disservice, because this recordis an incredible display of their own versatile, original talents. The follow up to 2021’s debut EP, Saccharine – which was written over a period of a few years – this record was a more concentrated effort. Mostly written during the pandemic and recorded by Will Yip (Turnstile, Mannequin Pussy, The Wonder Years, Circa Survive, Tigers Jaw) at Studio 4 in Conshohocken, PA, it completely unleashes the full force and fury of the band.

In addition to that stunning opening track, there’s the fraught, cathartic rush of “nothing (in my head)” and the snarling blast of “GET OUT”, which blends metal riffs with hyper pop-punk vocals, the hard-edged intensity of “the kids aren’t alright” – think early No Doubt if their songs were more abrasive – and the ferocious, ’90s-tinged clarion call of “BURN THE WITCH”, on which Kumar desperately implores: ‘You’ve got two feet/Why won’t you stand for something?’ Elsewhere, “cherry (we’re all gonna die)” is highlighted by grungy riffs – ‘Everything will be okay’ sings Kumar before deciding that ‘It’s never gonna be okay’ andbreaking into unhinged, unhappy laughter at the song’s end – while menacing album closer ‘Dreamer’ dives deep into the trauma, trials and tribulations that inspired this record. It all combines to make this an angry, blistering, and insightful exploration of barely holding it together in uncertain times.

Right in the middle of it all, however, is “in a breath”. A tender piano-led ballad, it doesn’t just slow the record down, but fully exposes the powerful vulnerability that drives these songs – even if it’s hiding, for the most part, behind the songs’ breakneck melodies and the band’s tight but raucous performances. Written by Kumar in 2018 and not intended to be on any album, it’s the one exception to the timeline of this record. It just so happened, once all the other songs had been written for it, that the band felt it would fit. And it does – somehow making the record even more cohesive than it otherwise would have been by allowing the listener to fully digest both what’s come before it and what then follows. “We were concerned this wouldn’t feel like an actual album,” admits Kumar, “but because we all worked on it together throughout this period of time, it feels really cohesive. It defines an era of our lives.”
“The fact that majority of it was written in this specific period of time,” adds Houngbedji, “with everything that’s going on – both in the world and in our own lives – it feels like it was a very transitional period that influenced what we were writing about. They all have similar themes.”

It’s not just a no-holds-barred reflection of the state of the world today, however. It’s one delivered from a unique point of view within a music scene that’s predominantly white. It makes Love Me Forever all the more important. Already, the band have experienced significant landmarks in their career to date - the video for Saccharine’s “i’m gonna tell my therapist on you” went viral, they’ve supported PUP and Mannequin Pussy on tour, have been featured in The Guardian, Kerrang!, Stereogum and Alternative Press and sold out their first ever headline show at Baltimore’s Ottobar – but it’s just the tip of the iceberg as anyone who has seen their highly energetic, whirlwind and very sweaty live shows can attest.

“I feel like the biggest thing of us existing in this scene,” says Houngbedji, “is just for more people of color being able to see us – and if they had doubts about going into music or like occupying this kind of space because of what the scene is like, they'll be like, 'Oh, wait...' We've had people of color come up to us after we played saying 'You make me want to start my own band' or ‘You made me feel more comfortable being there without being scrutinized.’ And I think that counts for something.” Adds Kumar, “It’s cool seeing people at our shows who are like ‘I’m going to start wearing my traditional jewelry because fuck it!’ and I’m like ‘You should! It’s stylish, it’s cool, it makes you unique – be proud of it!’”

That attitude, ultimately, is the beating heart of Pinkshift. It’s about defying the odds on both a personal and a universal level and showing the world – unapologetically – that they’re taking it on, and that the world better be ready. In fact, so invested in what the band means, they’ve delayed opportunities and offers for more traditional careers paths, like med school (Houngbedji & Kumar) or in chemical engineering (Vallejo) to focus on the band instead. What’s more, it’s paying off – “I literally never thought I would ever be in a position like this in music,” says Vallejo. “This is past anything I thought I would ever do. If something happened tomorrow and Pinkshift just wasn't there, I could go on with life being like 'Damn, I did that!' There are still so clearly-defined many goals that we’re working towards, but what really matters to me much more than seeing numbers go up on a screen is literally being there in person with people and sharing these cathartic emotions.”

“I feel like we can actually do something with our music,” agrees Kumar. “Before, it felt almost selfish to be in a band, because we were all going to do different jobs that were probably <<actually>> going to fucking help people. But now, I feel we can make people feel empowered to be themselves and express themselves. Even if it's ugly, because sometimes anger is self-care – especially when you're faced with all these systems that are just always trying to fucking kill you.” 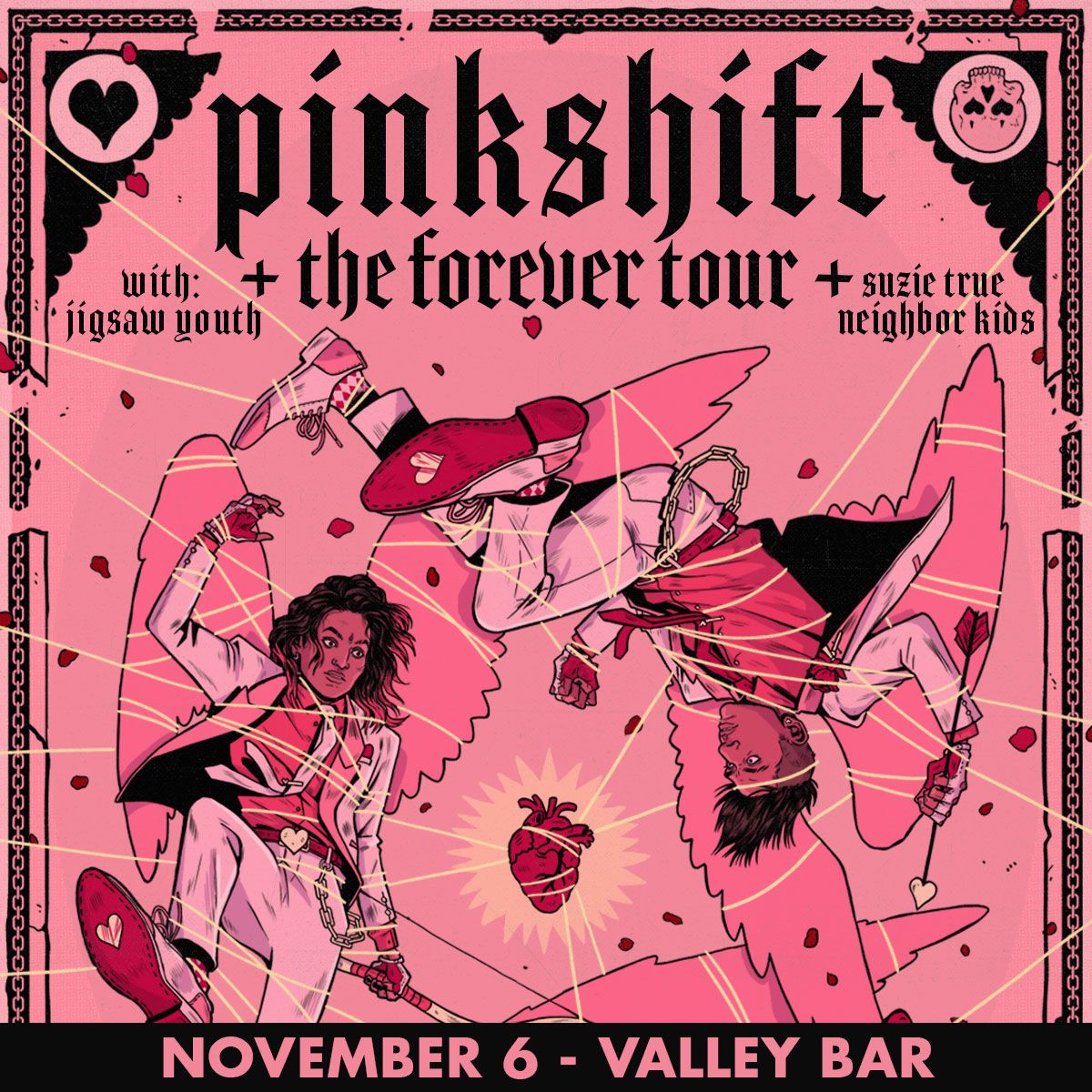