Podcast But Outside is a Los Angeles-based comedy video podcast founded in April 2019 by co-hosts Andrew Michaan and Cole Hersch. The title refers to the setting of the podcast, taking place in public often in the streets of greater Los Angeles. The show seeks to interview random passersby, sometimes alongside invited special guests. A videographer, referred to as "Intern," records the interviews, made available on YouTube and, for premium content, Patreon. In 2019, Vulture.com awarded the show with best video podcast among comedy podcasts. According to its hosts, it is the only podcast recorded outside.

The hosts employ "deadpan humour, often bordering on satire.' The edited video often shows "zoom-ins, graphics, and flashbacks to past episodes" for further entertainment. Reoccurring gags are the hosts "lying about their ages and bleeping out other podcasts’ names because they are competition." There is an estimated 5–10% success rate in courting passersby to agree to an interview. Upon completion of the interview, guests are customarily given a single US dollar as well as a sticker for their participation. During the COVID-19 lockdown, the show took to Omegle and featured a dating competition and video therapy sessions.
The show's 100th episode featured actor Jon Hamm, "a guest they'd been manifesting since the early days of the pod."﻿ 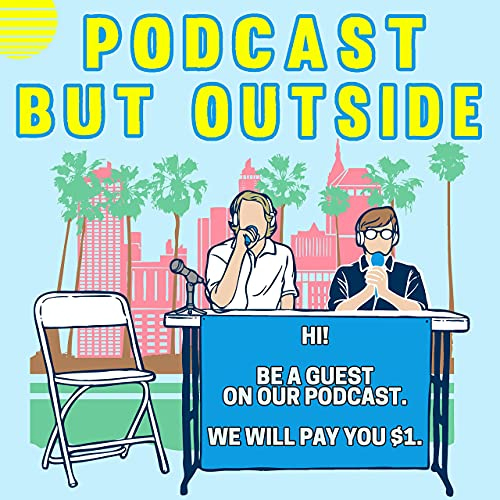