Pop Evil: The Versatile Tour with special guests Zero 9:36 and BRKN LOVE live at The Castle Theatre on August 4th.

﻿POP EVIL has been a staple at major festivals and in theaters and clubs for over a decade, despite the group’s relative youth. As they’ve ruled the roost with No. 1 Billboard Rock singles like “Trenches”, “Deal with the Devil”, “Torn to Pieces”, “Footsteps”, and “Waking Lions”, they’ve taken their inspired message to the people, on tours with modern rock titans and veteran acts alike. The band bunkered down in Los Angeles in the winter of 2019 to put the finishing touches on the yet to be titled new album due out later this year via Entertainment One (eOne). The band also enlisted new creative teams of producers and collaborators to emphasize the uniquely varied aspects of the band’s sound. As “Let The Chaos Reign” and “Work” might suggest, the contrast and fearless genre-defying cross-cultural pollination have never been stronger than on album number six. The preproduction process yielded close to 30 songs, whittled down to the most potent 12 that represent everything POP EVIL is about.

﻿Amplifiers still blare out of suburban garages everywhere. Guitars, drums, and bass still translate the emotion and energy of a generation better than anything. No matter what prevailing opinion may be, rock music still maintains its foothold just behind the pop culture curtain—as if in the wings waiting to return. BRKN LOVE carry on this tradition, while evolving it. Toronto singer and guitarist Justin Benlolo envisions a fresh future for the genre on the band’s 2019 full-length debut for Spinefarm Records produced by Joel Hamilton [Highly Suspect, Pretty Lights]. 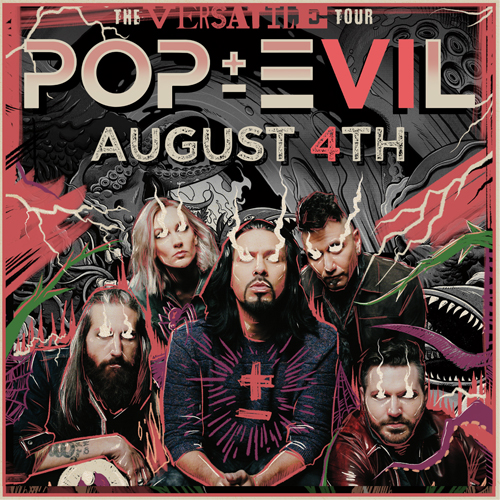