at The King of Clubs

The King of Clubs Presents:

Helmed by vocalist Spider (aka Spider One or MC Spider, the younger brother of Rob Zombie), the Boston-based underground electro-metal band Powerman 5000 earned a cult following along the East Coast with the release of their 1994 indie debut EP, True Force, and 1995's LP The Blood Splat Rating System.

The record went platinum, helped in part by the success of singles "When Worlds Collide" and "Nobody's Real" on MTV.

All ages w/ adult | Doors at 6:00pm
Please note that tickets are $5 more the day of when purchased at the door.

The King of Clubs 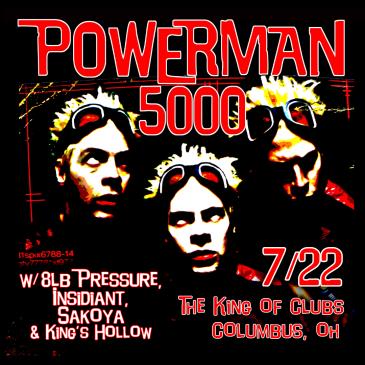