Próxima Parada blends soulful melody and hard-hitting rhythm into a sound distinctly their own, groovy and uplifting. Their music makes introspection and human connection sexy again.

Following the success of their last album, Próxima has signed with New-York-City-based record label, AntiFragile, and is releasing their next album, Kind Reminder, on Sept 27th. The first single, Musta Been A Ghost, is available now and gives a taste of what's to come: https://ffm.to/mustabeenaghost

Starting in 2012 as a group of college friends wanting to extend their dynamic to their community in San Luis Obispo, CA, they never dreamed that their passion would reach a global audience, that they’d perform at beautiful historic venues and music festivals, that their songs would earn awards, that their music would soothe and uplift people around the world.

About Mina & The Wondrous Flying Machine:

Mina & the Wondrous Flying Machine are a piano-driven cross-pollination of singer-songwriter, indie rock and a hint of jazz using lush chords and impulsive horn lines to create their distinctive sound. Their songs have been described as “if Joni Mitchell and Aimee Mann had a baby with Charles Mingus.” Live shows have emphasized variety and spontaneity, from didgeridoos to impromptu rappers to homemade megaphones and banging on alarm bells. The Wondrous Flying Machine try to be as adventurous and honest as they can, but most of all grateful to be making music wherever they may go. Founder Mina Keohane was forming ripples in the Indianapolis music scene as a jazz composer with her group making stops at Indy Jazz Fest and landing the cover of Intake Magazine, a feature in Nuvo and Indy Men’s Magazine. Deciding to take a break from instrumental music and going back to her roots as a singer, Mina put together the Wondrous Flying Machine as the vehicle for a new adventure in songwriting.

Kevin & the Anti-socials’ is an indie rock/pop band from Indianapolis fronted by singer/songwriter & producer Kevin Jones. Their contagious melodies and classic pop sensibilities make for a fresh, youthful take on the nostalgic sounds of the 60s & 70s. All while in tune with the jazz-infused footsteps of Mac DeMarco, Her’s, and boy pablo. Featuring the talents of Grace Mann (drums), Michael Kaster (bass), & Brandon Kaster (keys), they're certainly a new group to keep an eye on. 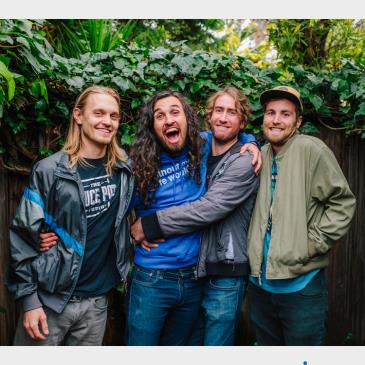