Pre-sale closed. Tickets will be available at the door and early arrival is strongly suggested. Table service is also available, please email VIP@avalonhollywood.com to reserve.

New Zealand’s own QUIX is coming through to the AVALON Hollywood for his Storm Tour with friends Cray, Choppa Dunks, RWDY, Amidy, and A-Cruz.

QUIX is one of trap’s most respectable music producers and his devoted fanbase is a testament to his expertly-crafted sound. With high energy tracks such as “Rat Traps” featuring Gucci Mane and his remix of “Right Here” by Keys N Krates, QUIX has proven himself to be a master of bass music production. Also known as a master on the decks, QUIX has been wreaking havoc in venues worldwide with his ability to blend track after track effortlessly.

Joining QUIX on the stop is Cray, whose incredible skills in production and live mixing are easily apparent when she’s throwing down her sets. As one of the handful of modern female trap producers, Cray’s been living it up with bass heavy bangers such as “BTFU” and “Up in Smoke.”

Bermuda’s Choppa Dunks have been killing it in the game lately. As a bass titan with bangers such as “Gosta” and “Bakaton,” Choppa Dunks has garnered support from the industry’s biggest names such as Borgore and Major Lazer as well as seeing his tracks released on tastemaker labels such as Buygore and Dim Mak.

RWDY will be supporting the night with his flawless music selection and expertise in live mixing. Having put out filthy remixes for Michael Jackson’s “Thriller” and Metallica’s “Master of Sorrow,” RWDY is the one to follow for 2018.

Come down to the AVALON for a night of filth and wall-shaking beats. QUIX, Cray, Choppa Dunks, RWDY, Amidy, and A-Cruz - are ready, are you? 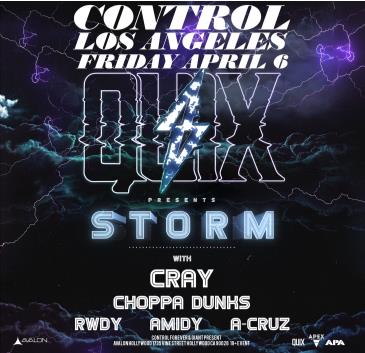