Holler On The Hill & MOKB Present at HI-FI

Processing...
408300
158365
Lucero's Indianapolis show at HI-FI has been postponed. We are currently working on a reschedule date.  Hang tight for more information. Please direct any questions to boxoffice@mokbpresents.com. You can follow our ongoing list of affected shows here: http://bit.ly/mokb-hifi-covid19updates
JOIN WAITLIST

Lucero's Indianapolis show at HI-FI has been postponed. We are currently working on a reschedule date.  Hang tight for more information. Please direct any questions to boxoffice@mokbpresents.com. You can follow our ongoing list of affected shows here: http://bit.ly/mokb-hifi-covid19updates

Lucero has long been admired in their hometown of Memphis, where they have hosted “The Lucero Family Block Party” every spring for a number of years. At the 2018 Block Party they celebrated their 20th anniversary as a band, with the city’s Mayor Jim Strickland officially declaring it “Lucero Day.”

The group found their name in a Spanish/English dictionary. “Lucero” is variously translated as “bright star” or “morning star.” None of them can speak Spanish.

It’s been two decades since original members Ben Nichols, Brian Venable, Roy Berry,and John C. Stubblefield (keyboardist Rick Steff joined in 2006) started playing shows in Memphis. The band’s first show was April 13, 1998 at a warehouse space across the street from what is now the National Civil Rights Museum, the infamous Lorraine Motel where Martin Luther King Jr. was shot.Their first set was six songs played to about six people. On August 3, 2018, record release day for Among the Ghosts, the band will be co-headlining Red Rocks Amphitheater in Colorado.

The band’s ninth studio album, Among the Ghosts, is their first for noted Nashville indie label Thirty Tigers. It was recorded and co-produced with Grammy-winning engineer/producer and Memphis native Matt Ross-Spang (Jason Isbell, Margo Price, Drive by Truckers) at the historic Sam Phillips Recording Service, the studio built by the legendary producer after outgrowing his Memphis Recording Service/Sun Studio.

Recorded primarily live as a five-piece, Among the Ghosts eschews the Stax-inspired horns and Jerry Lee Lewis-style boogie piano featured on some of the band’s past recordings for a streamlined rock & roll sound that pays homage to their seminal influences as it seeks to push that legacy into the future. For a band who carried the torch of the alt-country movement back in the 90’s and helped pave the way for what is now called Americana, Lucero have re-discovered what inspired them in the first place. The sound is more their own and at the same time not exactly like anything they’ve done before. This is a band settling into their craft. The 10-song disc’s title is both a tribute to the spirits which roam the streets of their fabled city, as well as the hard road the determinedly independent band set out on 20 years ago. The band played around 200 shows per year for many of those 20 years.

With a nod to his younger brother Jeff Nichols, an acclaimed filmmaker whose movies include Loving, Mud, Take Shelter, Midnight Special, and Shotgun Stories; Nichols has written songs that are cinematic short stories, steeped in Southern gothic lore. There are nods to regional authors like Flannery O’Connor and Faulkner, as well as newer writers like Larry Brown (BigBad Love, Fay), Ron Rash (The Cove, The World Made Straight), and William Gay (The Long Home).

As the first album he’s written since his marriage and the birth of his now two-year-old daughter Izzy, Nichols approached the task as a narrator rather than in first person. It’s a dark palette that includes tales of a haunting(“Among the Ghosts”), a drowning (“Bottom of the Sea), a reckoning with the devil (“Everything has Changed”), a divorce (“Always Been You”), and a shoot-out (“Cover Me”). And that’s just Side A. Side B is a letter from a battlefield (“To My Dearest Wife”), a crime (“Long Way Back Home”), a straight-out rocker (“For the Lonely Ones”) and even a spooky spoken-word cameo from actor Michael Shannon, who has appeared in every one of Nichols’ brother’s films. The song’s title “Back to the Night” references a line from Nick Tosches’ Jerry Lee Lewis biography, Hellfire. In addition, there’s a song Nichols wrote for his brother’s movie Loving, which appeared in the film and on the soundtrack, re-recorded for Among the Ghosts with the whole band.

“You could also say there’s a rescue, a getaway, a survival story and a middle finger to Satan himself,” laughs Nichols. “It’s all in your perspective.” 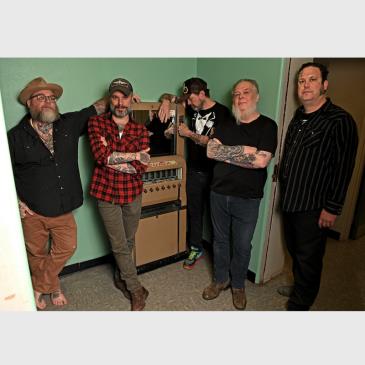