Ricky Montgomery's music was ahead of its time -- literally. Four years after the release of his debut album, and a decade after he wrote some of it, the Los Angeles native's indie-pop has been a balm in the midst of a heavy time, comforting listeners with warm melodies and relatable lyrics. It all started in July of 2020, when a pair of singles from 2016's Montgomery Ricky -- the gently swaying "Mr Loverman" and string-soaked stunner "Line Without a Hook" -- took off on TikTok. "I think because we had a really traumatizing year, these songs kind of found a moment," Montgomery says. "Because they're all, in their own way, about traumas in my life."

Now, with a fan base that's all caught up, Montgomery is sitting on a trove of new music built on this now-familiar foundation: "Mr. Loverman" pairs intense family strife with soft acoustic strums that build to a rousing sing-along chorus; "Line Without a Hook" rocks a bit heavier, with strings and power-pop riffs weaving around cathartic one-liners that speak to the jumble that is one's coming of age. He balances melancholy with a touch of sweet humor and loads of humanity. It's no wonder these songs have racked up more than 210M streams so far, landing simultaneously on the Spotify 200 and Spotify Viral 50 charts -- a feat few artists can claim -- with over 50 entries worldwide. As of early 2021, Montgomery's catalog was picking up 15M global streams weekly. https://www.youtube.com/c/RickyMontgomeryTube

Peter McPoland is a twenty-year-old artist and actor from The Woodlands, Texas. Peter first started writing and recording songs at an early age. In high school his band won Battle of the Bands, and as the prize they played Warped Tour in Cleveland. Shorty after graduating high school, and moving to Rhode Island with his family, Peter went solo. He started posting himself singing covers and originals on TikTok. Over the last year, he's accumulated over 220,000 followers on TikTok. With only six songs available on streaming services, Peter has over six million streams and over fifty thousand followers on Spotify. Peter currently writes, produces, and records all his songs from his bedroom in Rhode Island. https://www.youtube.com/channel/UC0KqD0SzttJQHyew9yK5qaQ 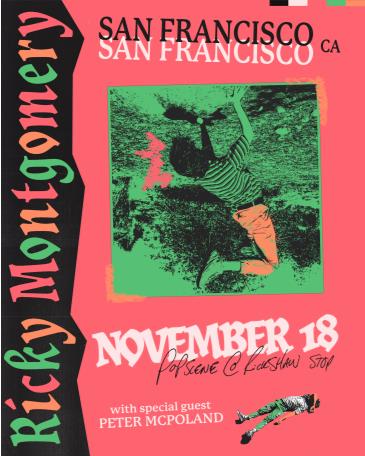