PEACEMEAL, released worldwide 3/5/21, finds Ron Gallo exiting the dark confines of the garage and going outside to make music with no limitation or plan. The result is a colorful hodgepodge of 90's hip-hop, r&b, weirdo pop, jazz, and punk -- his version of "pop music." Though the sounds have changed from album to album, and most drastically this time, the sense of humanity, humor and a truly eccentric worldview is the common thread in all of Gallo's music. This time we see a Gallo free of expectation, exploring music again in an almost childlike fascination way and playing pretty much all instruments himself, with some assistance from producer Ben H. Allen. Written in similar circumstances the whole world would be in less than a year later, the introverted, isolated perspectives have become oddly universal. http://rongallomusic.com/

Released in June of last year, Becca Mancari's critically-acclaimed ​The Greatest Part​ is a deceptively upbeat collection of sharp indie pop that explores Mancari’s experience growing up gay in a fundamentalist Christian home. Described by the New York Times as “Stereolab gone Nashville,” it boasts infectious electric guitar hooks and explosive percussion, cloaking the emotional weight of its subject matter in vibrant technicolor. The celebratory sound was by design – the album was meant as a paean to resilience and joy in the face of pain. Still, Mancari felt there was more to be expressed in these songs – she’d been having a recurring dream about the river, too, which felt like a symbol of unfinished business. http://www.beccamancari.com/

Chickpee is the solo project of multi-instrumentalist and Italian native Chiara D’Anzieri and it hones in on a warm, 60s pop sound on their latest single, utilizing swooning vocals, twinkling keys, and crying guitars to create a track that oozes a kind of melancholic nostalgia both sonically and lyrically. https://www.lookatmyrecords.com/premieres/2021/3/9/chickpee-two-trees 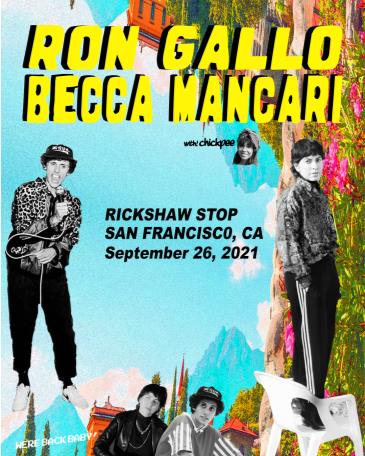