(click this link and save your QR code to your notes on your phones as a screenshot/its a QR code/you can show it all restaurants and bars and venues thereafter).

Thank You for keeping us all moving forward and enjoying Live Music together.  – BooM BooM RooM

ROOSEVELT COLLIER is joining this bill with COLLECTIVITY for a rare and exceptional "first time ever" collaboration as these powerhouse musicians perform the whole night together as one band.

Forming a super group in the most accurate sense of the term,  Expect a relentless onslaught of spine-tingling jam-rock, blues, soul and funk. The sky is truly the limit with this mind-melting, soul-combusting lineup.

In the pantheon of bands who have chiseledtheir name in BooM BooM RooM show greats, this one is at the top of the list. Sacred pedal steel guitarist/vocalist Roosevelt Collier is one of the most highlyrespected musicians on the scene today. He has shared the stage with a who'swho of greats including The Meters, Allman Brothers Band, Tedeschi Trucks Band,Government Mule, Widespread Panic, Karl Denson, String Cheese Incident,Umphrey's McGee and many more.

Collectivity
Freshly transplanted to San Francisco Bay Area from Shanghai, China and originally hailing from Virginia, Ben Misterka’s story is anything but ordinary.  Spending the past 6 years based in Shanghai, he is well known as a top call session and touring guitarist, regularly performing at arenas, major festivals, and intimate clubs alike, with leading pop artists, internationally renowned touring acts, and his original project “Collectivity”.  He is quickly turning heads and making an impact across California and beyond.           In 2017 Collectivity opened for Larry Graham at Shanghai Arena, performed at Ulanchabo World Music Festival in Mongolia, Headlined Candy Mountain Festival in Chengdu, and has recorded and produced a video album of original music. The first single to be released in March 2018.
Collectivity’s original music is a high energy, jazz-funk, psychedelic soul with a rock edge performed by world class musicians.  Carefully arranged and and uniquely written tunes with a jazz sensibility, ripping and soulful guitar solos, funky ass horn breaks, thick lush organ and synth tones, fat groovy low end, with a dirty pocket made for dancing while gettin yo mind right!
Misterka has toured through China, Japan, and the USA, playing with many acclaimed artists as a sideman, and his own groups.  He has performed and/or worked with; Alex Han, Morris Hayes, The Voice of China, Tia Ray, Glen David Andrews, Tan Wei Wei(谭维维), Leah Dou (窦靖童), Yu Quan (羽 泉), Anhayla, Kimberly Nichole, opened for Erykah Badu, Larry Graham, and many others.  He has studied with Wayne Krantz, Fred Hersch, and Doug Richards. 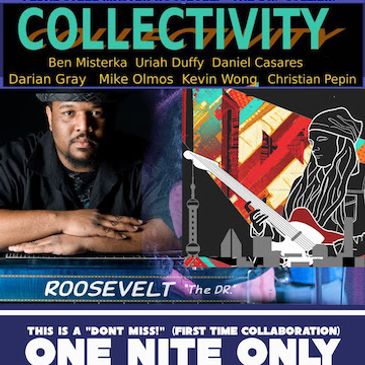