RSVPs are currently FULL for this event. Priority admission will be granted to those who have RSVPed, but is not guaranteed due to limited capacity. If you did not RSVP, you may be placed on a waitlist and admitted only if space becomes available.

Re-Opening Party w/ SnackTime & Deborah Bond
You're invited to join us on Wednesday, September 29th for our official Re-Opening Party in The Lounge! Whether you're returning for the umpteenth time or making your first visit, come check out our updated space, enjoy Chef Rob's delicious new menu, and vibe to some live music from SnackTime & Deborah Bond. The Lounge opens at 6pm for dinner & drinks, and the performances will start around 8:30pm.
It's FREE and open to all. Please note: RSVP is required to attend, but does NOT guarantee entry. Capacity is limited, and only guests who have RSVPed in advance will be admitted on a first-come first-served basis..

SnackTime
Website | Instagram | YouTube
Established in the Spring of 2020, SNACKTIMEPHILLY is an unapologetically positive and resonant band born out of the current worldwide music industry-wide shut down due to COVID19. While typically the musicians of SNACKTIME would be performing in clubs or venues, the sudden closure of entertainment halls across the city caused these performers (like many others) to choose resilience. SNACKTIME is a direct reflection of Philadelphia: loud, high-energy, talented, and HUNGRY.

Launching from her longtime home-base of Washington, D.C. and taking flight to the rest of the world, Debórah Bond has become an integral part of the fabric of the worldwide indie-soul scene.

Debórah grew up absorbing the golden age sounds of the 70s and 80s soul music that bellowed through her childhood home in New Haven, CT. Artistically, she stands at the intersection of Anita Baker, Sade and Chaka Khan, though she also credits Luther Vandross, Whitney Houston and Stevie Wonder (among many others) for inspiring her to pursue a career as a recording artist.

Upon her arrival in D.C. to pursue a degree in journalism at American University, Debórah quickly fell in lockstep with the top musicians of the local scene. Eventually, she formed a life-changing partnership with the production team Third Logic, comprised of bandmates and songwriting partners Robbie McDonald, Aaron “Funky Chuck” Evans and Kinard Cherry. This partnership yielded two studio albums: DayAfter (2003) and the critically acclaimed follow-up Madam Palindrome (2011). Playing for eager and excited audiences, she headlined packed houses around the US and EU including: Warner Theater, 9:30 Club, Kennedy Center Millennium Stage, Blues Alley, Blue Note NYC, Cobb Performing Arts Center in Atlanta, and Jazz Café in London. In 2015, she headlined a four-week international residency for Jazz At Lincoln Center in Doha.

An accomplished radio personality and voice over artist, she hosted a weekly Sunday afternoon radio show at Sirius XM, where she worked for ten years. She recently composed and performed the theme song for a brand new podcast, The Suga, hosted by actresses Tika Sumpter and Thai Randolph. For the past decade she’s been doing radio jingle and voice over work for Amsterdam-based PURE Jingles.

In addition to her career as a performing artist, she’s a pillar of the D.C. music community, having served six (6) terms as D.C. GRAMMY Chapter Governor. As an educator, she’s been a mentor and voice coach to many aspiring vocalists, and since 2018 has served on the faculty of the Richardson School of Music. She also offers private teaching and coaching sessions.

Her journey in music thus far has helped her to cultivate a long-standing, loyal audience that has been eagerly anticipating new music, which she delivered “compass: I ” released on March 5th, 2021. The new album, in which she executive produced landed at #10 on the iTunes R&B charts on release day. 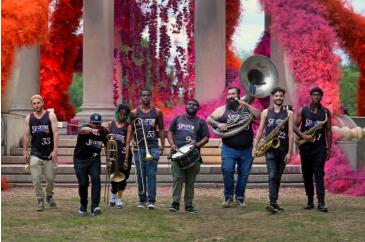