Queen City Presents at The Rino

Covid Terms and Conditions: Patrons required to show either a Proof of Vaccination or Negative Covid test within 72 hours. Masks are required when not actively eating or drinking.

For as much as the world has changed since Real Friends first emerged in 2010, the band’s mission
hasn’t. The Illinois quintet continue to bleed without apology and write songs that make it okay to feel
everything: the ups, the downs, and anything else in between. Rather than shy away from emotion, the
group run right towards it with distortion cranked and hearts opened, tightening their careful distillation
of pop and punk on each subsequent release. When the band—Dave Knox [lead guitar], Kyle Fasel
[bass], Eric Haines [rhythm guitar], and Brian Blake [drums]—welcomed vocalist Cody Muraro in 2020,
the goal stayed the same as they crafted new music for Pure Noise Records.
“It’s really still the same mission,” affirms Kyle. “We write songs you can connect to. We want those
songs to be a part of your life as much as they’re a part of our lives. This band is everything to me. We’re
all so invested in every aspect of this that we couldn’t stop. I’m more grateful than ever for Real
Friends.”
A diehard audience might be even more grateful. Real Friends have forged and strengthened a deep
connection with fans over the years. The group’s 2014 full-length debut, Maybe This Place Is the Same
and We’re Just Changing, marked a turning point. Rock Sound named it one of the “Top 50 Albums of the
Year.” 2016’s The Home Inside My Head maintained this momentum with further acclaim and sold-out
shows. In 2018, Composure incited applause from Music Connection, Alternative Press, Substream
Magazine, New Noise, and Billboard who described it as “raw.” To date, they’ve also amassed over 100
million streams and counting.
During 2020, the band amicably parted ways with their original vocalist. They continued to look ahead,
auditioning singers until Cody came into the picture.
“We all felt the conviction in his voice,” Kyle goes on. “That was what distinguished him the most.
Emotion is a signature element of Real Friends. That came through right away, but he also brought some
grit of his own.”
“We share influences and come from a very similar place where music is a massive part of our lives,”
adds Cody. “It was such a good fit, because of that. Everything clicked. When they called me, they were
all on the line, so I thought, ‘Something’s going to happen’. They asked me to be the singer of the band. I
took the job. A month later, I was down in L.A. recording music with them.”
Signing to Pure Noise Records, they co-wrote with Andrew Wade [A Day To Remember] and recorded
with longtime producer Mike Green. Now, they ignite this next chapter with “Nervous Wreck.” On the
track, anxious guitars toss and turn underneath confessional verses before crashing into a catchy chorus.
“It was inspired by feeling like you’re stuck in a way,” Kyle reveals. “When you’re around other people,
you don’t really feel like yourself. When you’re by yourself, you feel isolated and like a nervous wreck all
the time.”
On its heels, “Storyteller” threads a clean guitar melody around tense vocals, culminating on a scream,
“You’re a liar.”
“It’s inspired by a couple of different situations where someone tells you one thing, but you find out it’s
not the truth,” he goes on. “They’re telling these stories over and over again.”
In the end, you can rely on Real Friends.
“When you listen to this, I hope it still sounds like Real Friends,” Kyle leaves off. “We’re moving in the
same direction, and we have a common vision. The spirit is still there.” 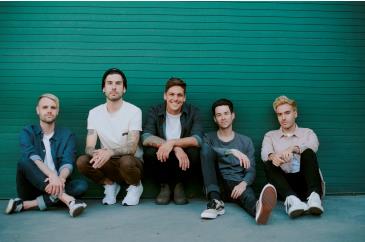