*PLEASE READ: For the safety of the fans, band, crew, and venue staff, proof of a Covid vaccination or a negative Covid test within 72 hours of the show will be required for entry.

For nearly 25 years, Reckless Kelly has graced the musical landscape with a high-powered form of Americana, equally rooted in raw passion, refined musicianship, and gritty authenticity. With the dual release of two new albums—American Jackpot and American Girls—the Idaho-bred band presents a beautifully detailed portrait of their beloved country, turning their nuanced songwriting to its many glories and tragedies. While one batch of songs centers on slice-of-life storytelling and the other explores the complexities of human connection, the collective body of work unfolds with a profound and often eye-opening attention to the subtleties of American life.

Although Reckless Kelly initially intended to make just one album, the project took on a life of its own once they headed into the studio. “I wanted to produce this one by myself, just to try that out, and I made sure to book plenty of studio time to get it done right,” says Willy. “We ended up moving along really fast, so I pulled out a few more songs and figured we’d end up using them down the road. Before we knew it, we had enough material for two really good records.”

For two decades, Will Hoge has carried the torch for American rock & roll, carving out his own blue-collar sound rooted in amplified guitars, melodic hooks, southern soul, and rootsy stomp. It’s a sound that nods to the best moments of the past — the punch of Tom Petty’s anthems; the countrified twang of Buck Owens’ singing; the raw, greasy cool of the Rolling Stones — while still pushing forward into new territory, with Hoge’s storytelling and larger-than-life voice leading the charge.

Trends come and go. Yet Will Hoge remains a mainstay of the Americana landscape, hitting the road year after year, turning new pages of a career whose twists and turns — including Number One hits, a near-death experience, major-label record deals, and hard-won independence — sound like stuff of some long-lost movie script.

Maybe that’s why Tiny Little Movies, his eleventh album, feels so cinematic. Recorded alongside Hoge’s band of road warriors, the album brims with the same electric energy that fuels his shows. These are songs for highways, hotels, the heartland, and those all-too-brief moments at home, glued together by self-reflective lyrics that find Hoge making peace with life, love, and the long ladder that leads to success.

“Dealing with anxiety is a bit of a constant for me,” the songwriter admits. “I spent years worried about things falling apart — personally, musically, emotionally, financially, you name it. As I’ve gotten better at my life, there’s a moment of realizing that this is it. It is where it is supposed to be. So I’ve been looking around, embracing the good and the bad, hoping to change what I can, and accepting the things I can’t.”

Don’t be fooled; this is still the same fired-up Hoge who released 2018’s My American Dream, a sharply-worded protest album that tackled everything from political corruption to social issues. Those progressive stripes run throughout Tiny Little Movies, too, rearing their heads during album highlights like “The Overthrow” — a riff-heavy rocker that anticipates the removal of a no-good dictator — and “Con-Man Blues,” whose overdriven guitars and pummeling percussion mark one of the most blistering moments of Hoge’s entire catalog.

Even so, a theme of self-acceptance runs through the center of Tiny Little Movies. On the atmospheric “Even the River Runs Out of This Town,” Hoge pines for the one who got away — or, more accurately, the one he allowed to get away, knowing she’d only be dragged down by his presence. “I love you so much, I ain’t asking you to stick around,” he sings during the song’s final moments, his guitar flanked by layers of gauzy, sympathetic reverb. On “Midway Motel,” a track co-written with the Wild Feathers’ Ricky Young, he salutes the run-down hotels that have housed his fellow musicians for decades, finding the strange beauty in places where the TVs are “as broken as the world outside.” He teams up with co-writer Dan Baird (former frontman of the Georgia Satellites, as well as Hoge’s former guitar player) for the R&B-influenced “My Worst,” a song that finds him owning up to past mistakes, then chases down inner peace with “Maybe It’s OK,” an autobiographical song rooted in the realization that Hoge — mistakes and all — has done pretty well for himself.

And Will Hoge has, by all accounts, done pretty well for himself. “Even If It Breaks Your Heart” — a tribute to his musical upbringing in Franklin, TN, just 30 miles south of Nashville — became a crowd favorite when it appeared on 2009’s The Wreckage, then grew into a Number One country hit when Eli Young Band covered it in 2012. One year later, Hoge earned another smash with “Another Song Nobody Will Hear,” a duet with Wade Bowen that topped the Texas charts. When a life-threatening car collision left a battered, broken Hoge in recovery for a year, he turned the experience into fuel for his music and his own heightened appreciation for life. He also learned to trust his own instincts, producing a number of his own albums — as well as albums for Red Wanting Blue, Stephen Kellogg, and up-and-coming songwriter Jackie Darlene — while releasing records like 2013’s Never Give In and 2015’s Small Town Dreams on his own label, Cumberland Recordings.

For the self-produced Tiny Little Movies, Hoge chose to highlight the raw chemistry of his road band. The group rented a rehearsal space in East Nashville for four days, then headed south of town to Trace Horse Studio, where the group — Hoge, guitarist Thom Donovan, drummer Allen Jones, and bassist Christopher Griffiths — tracked each song in a series of live, inspired takes. The goal wasn’t just to serve the song; it was to serve the band, too.

“There’s a classic, rock & roll centerpiece to everything this band does, but it’s still a group of four different people, and we all bring different influences to the table,” says Hoge, who turned to Grammy-winning producer/engineer Matt Ross-Spang (Jason Isbell, Margo Price, Lori McKenna) to mix the album at Sam Phillips Recording. “We’ve got a metalhead in the group. We’ve got a Motown fan. We’ve got a guitarist who loves Johnny Marr. It’s a unique hodgepodge of sounds coming together, and we tried to accentuate that.”

Great rock & roll records rarely follow a script. Tiny Little Movies may nod to the heartland rockers who came before Hoge, but this is an album that stands in a theater of its own, accented by everything from the country storytelling of Hoge’s southern roots to the soulful sway of his voice. It’s Hoge at his best: raw, amplified, and inspired, with enough hunger to keep him inspired and enough contentment to add perspective to his rougher edges.

“I grew up loving rock & roll records, and that’s my intent every time I go into the studio — to honor that sound,” he says. “You get closer sometimes more than others. This time, I think we nailed it.”

The follow-up to their acclaimed 2016 album Sunset Motel, American Jackpot and American Girls embody a wonderfully eclectic sonic palette, achieved with the help of V.I.P. guest musicians like Gary Clark Jr. and Charlie Sexton, along with several members of their own legendary family (including Uncle Gary Braun on chromatic harmonica and their father Muzzie Braun on lead and harmony vocals). Recorded at Arlyn Studios in their adopted hometown of Austin, both albums abound with an unbridled vitality—an element that has much to do with the band’s deliberate decision to keep pre-production to a minimum in order to harness the magic of in-studio spontaneity. “There’s something incredible about the first time you play a song really well together, and we don’t ever want to waste that take on the rehearsal room,” Willy notes.

One of many songs penned with Idaho-born singer/songwriter Jeff Crosby, “I Only See You With My Eyes Closed” provides one of American Girls most haunting moments, its intensity heightened by Sexton’s ethereal guitar work. But on “Lost Inside The Groove,” American Girls turns impossibly jubilant, bringing swinging rhythms and a fiery guitar solo to the song’s expression of lovestruck adoration. “Shawn Sahm sent me that song idea, so we worked it out and had him come down and play guitar and Vox Continental organ,” explains Willy, referring to the son of Sir Douglas Quintet/Texas Tornados founder Doug Sahm.

Though the two brothers first forged their musical partnership back in Idaho, they later decamped to Bend, Oregon, where they quickly linked up with Jay Nazz. Soon after forming Reckless Kelly (whose name nods to the legend of Australian highwayman Ned Kelly), the three musicians relocated to Austin and rounded out the lineup with bassist Joe Miller and guitarist David Abeyta (who exited the band after the release of Sunset Motel). Over the years, they’ve delivered a string of critically lauded albums, including 2011’s Grammy-nominated Good Luck & True Love and 2013’s Grammy-winning Long Night Moon.

With the release of American Jackpot and American Girls, Reckless Kelly hopes to lead listeners to thoughtful reflection on their own experience of living in America, and possibly invite a certain purposeful nostalgia. Mostly I just hope these songs remind them of all the different aspects of growing up in America, and feeling so lucky to live here,” says Willy Braun. 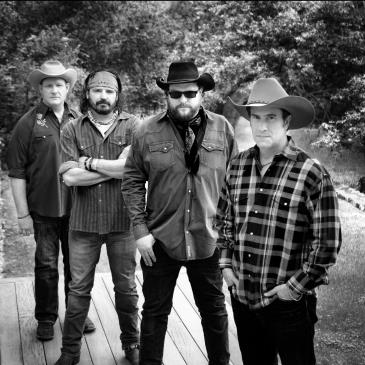