From "existential doom-bops" to rip-roaring anthems about hog gods, The Toxhards offer an electric and eccentric new sound, bound to leave you in need of a change of pants. The Toxhards are perhaps best known for their debut single, "How Lucky Am I?" garnering nearly half a million streams within the first year of release and are renowned for their rousing, theatrical live performances, proving more and more with each new show that they are the future of alt-rock. Consisting of Alan Macchiarolo (bass/vocals), Emerson Harris (guitar/vocals), Matt Garcia (lead guitar), and Casey Donovan (drums), The Toxhards are here to share with the world their perspective on music, art, and life. The only question is... are you along for the ride on The Toxhard Express?

Hailing from Southern California, Vagabond Code was formed in 2019, writing and performing songs inspired by the freeways, oceans, and vibes of the Golden State.

Guitarist Kaveh Talebi and drummer Josh Kendall have played in the LA music scene since the early 00s. They connected with bassist and songwriter Matt West in late 2019 as they were looking to complete a series of songs they had begun to develop for a new project.

Shortly after their initial sessions in Burbank, California, the Coronavirus Pandemic put the entire world on hold. Despite the shutdown, the trio continued to work, trading roughly recorded demos back and forth, assembling arrangements remotely, and establishing a unique, if not unconventional, collaboration. With quarantine restrictions in place, the trio committed to a sort of ‘bubble,’ taking their creations into a home-built rehearsal space in Glendale, figuring out how to rework songs written digitally and separately into something with a more live, organic human feel.

With finished songs and lyrics but no singer, the band looked to West, who happened to have a professional background in sound design and production along with a home recording set-up. Crossing the valleys of SoCal, West relocated his home studio set up near the beach to the band’s practice space in Glendale. West and Kendall then set to work, assembling a control room in the living room, running cables through the kitchen, and rigging an echo chamber in a bathroom shower. Throughout the summer of 2021, they recorded tracks for a half dozen compositions to use as demos to attract a singer.

Those demos eventually caught the attention of vocalist Jai Alexander, who joined the group in early 2022 and contributed vocals to those tracks, which were later mixed and mastered by Grammy-award-winning engineer Chris Sorem at Nest Recorders in East Los Angeles and released as the EP “Formation.”

Mary Chicken Soup & Rice, sometimes haunted, sometimes sleazy, blends sounds from dark wave and post-punk genres similar to The KVB, Tempers, A Place to Bury Strangers, and L.A.’s own Cold Cave. Elements of spoken-word dreamscapes like Legendary Pink Dots and Do Nothing, as well as threads of fantasy and glam rock are also found throughout the band’s music.

Although MCS&R are new to L.A.’s music scene, founding member Matthew Dunehoo fronted bands in New York and his native Kansas City before moving to Los Angeles in July, 2022. The band came together organically with Dunehoo on vocals, Andrew Skikne and Grant Lovelace on guitars, Eric McCann on bass, Melissa Phillips on keys/synths, and John Daren Thomas sitting in on drums for the band’s debut.

The band’s first show at The Mint, December 3, will be an intimate, arresting, and lustful performance for friends, new and old. Birthday cake, ear plugs, and a generous serving of eye contact will also be provided. 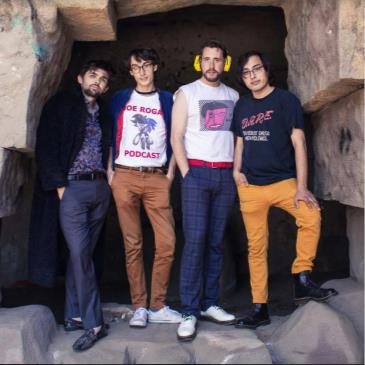