Doors at 7:15pm
Brandon Shaw and the Embargoed Releases

Brandon Shaw and the Embargoed Releases were formed in early 2022 and have sold out The Hotel Cafe several times. The band, known for heartland rock reminiscent of Jersey rockers and the cult singer-songwriter John Eddie, plays a mix of originals and covers. Known for the intensive and immersive live experience, the band will play a small circuit of Southern California shows later this year.

Any singer worth their salt was influenced by the greatest entertainers of eras gone by. Most have takenthese inspirations to unique heights of flattery and imitation but nothing more. Its time for a new day.Damon Dae. Original. Uniquely his own.With his easily identifiable sultry tenor voice, he is destined to find his place in history amongst the best.He has the ability-- a gift really-- to take a melody and make you soar, make you submit and make yousing along.Born in Sioux City, Iowa, eight year old Damon, the youngest of four, and his family, moved to FortWorth, Texas. This is where he was first influenced by attending his big brother Raymond’s bandaudition. Now in Los Angeles, Damon is not only an experienced singer but has branched out as asongwriter & producer.Not one to hide behind studio tracks, give Damon a microphone and a live audience and see a completeentertainer. When he sings it, he means it. He'll make you dance up a sweat then melt you with a ballad.Leaving you as raw emotion sensitive to the touch.Damon embraces his influences of Jeffery Osborne, Freddie Jackson, James Ingram, Luther Vandross,Peobo Bryson, Michael McDonald but, most of all, his songs and voice are of the original Damon Dae. Hehas weathered the trials and tribulations of the average up-and-coming performer and has emerged assomething more. He's a polished professional who's ready for his close-up. Giving you something youcan feel.

Founder of The Mint in 1990, Jed helped ignite an otherwise non-existent music scene in Los Angeles,helping the likes of Macy Gray, Ben Harper, The Wallflowers, and many, many others to become theartists they are today. Jed also is a musician/guitarist/songwriter who joined musical forces with DamonDae to create “Resurrection Road”. The mission? To resurrect Soul music for the soul. Originally a bluesplayer, Jed was able to absorb the many styles that made their way through the hallowed stage of TheMint over the years, to create a sound of his own. The result is the fresh soulful sound you will hear withRESURRECTION ROAD.

Fronted by Oscar Bugarin and Rae Cole, Calling Cadence is a band rooted in harmony — harmony between voices, between songwriters, and between genres like rock, country, swampy blues and Southern soul.

Calling Cadence, the band's self-titled debut album, showcases a group whose songs nod to the past while resolutely pushing forward. The album was recorded, mixed, and mastered straight to analog tape. Computers were only employed for streaming prep and CD replication. Produced by David Swartz and Matt Linesch, the album is being released on their label, hi-res records. The producers and band thought long and hard about diving into the all-analog domain but came to the conclusion that the final product would benefit in a way that digital would not allow. The 15 songs shine a light on Calling Cadence's strength as a live act, blending Oscar and Rae's entwined voices with vintage keyboards, guitar heroics, and plenty of percussive and low-end stomp. The accompanying musicians on this album include Josh Adams on drums (Jon Batiste, Norah Jones, Devendra Banhart, Beck), Mitchell Yoshida on keyboards (Edward Sharpe & the Magnetic Zeros), and Elijah Thomson on bass (Father John Misty, Nathaniel Rateliff).

For Calling Cadence (whose name pays tribute to Oscar's time in the army), recording to analog tape wasn't just a production choice; it was a way of maintaining honesty with themselves and their audience. Like the classic albums that inspired Calling Cadence's layered vocal arrangements and warm, guitar-driven sound, the record is a genuine snapshot of a band on the rise. 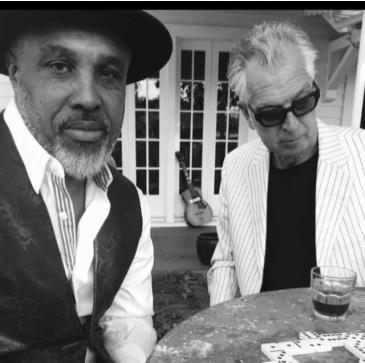