Revivals of Blackness is an artistic offering to our kindred, honoring the life-giving contributions of global Black folks by staying real and more than well as we navigate legacies of U.S. racial violence. This innovative multimedia performance centers and challenges the ways we think about how Blackness intersects with ancestry, archive, ritual, and tradition.

Created collaboratively by artists Lela Aisha Jones, Luke Carlos O’Reilly, Alex Shaw, and filmmaker Aidan Un, this dynamic virtual ceremony interweaves music, dance, poetry, interviews, and visuals to illustrate the collective lived experiences of diasporic Blackness as effervescent, fluid, infinite, wayward, and always right on time. It invites us all to question and reflect upon the multitude of luscious ways that Blackness shapes our lives.

This project is supported by a Special Projects Grant from The Presser Foundation.
Join us virtually for the world premiere of Revivals of Blackness on Thursday, June 3rd at 7:30pm ET or Sunday, June 6th at 7pm ET. The film screenings will be followed by a live Q&A with the creators. RSVP for free to receive an email with the premiere link on the day of the event.


Aidan Un is a French-Korean-American filmmaker and photographer based in West Philadelphia. He works primarily in the genre of documentary and is interested in questions of culture, place, and identity. Recent works include Sisters of the Soil (2021), a short documentary film made in collaboration with Raishad Momar about a Black-owned bookshop in Philadelphia; The Ancestors Live (2020), a feature-length documentary about Kùlú Mèlé African Dance and Drum Ensemble; video and photo documentation of Modupúe | Ibaye: The Philadelphia Yoruba Performance Project, a community-embedded exploration of the city's rich and diverse expressions of Yoruba-rooted traditions and culture. His work has been featured at the Philadelphia Asian American Film Festival, Mustard Seed Festival, The Outlet Dance Project Festival, New Urban Film Festival, the Philadelphia Museum of Art, and Blackstar Film Festival. Aidan is also a member of traditional Korean percussion group URIOL and of the Philadelphia chapter of FICA (Fundação Internacional de Capoeira Angola/International Capoeira Angola Foundation).

Luke Carlos O’Reilly is an award-winning pianist and composer that has had a passion for music since the early age of 4. He is most heavily influenced by Jazz, Soul, R&B, Gospel, Latin Jazz, Hip-Hop and Classical music. Before the age of 17, Luke had been given the opportunity to play with the likes of Clark Terry, Joshua Redman, Walter Blanding, and Steve Turre. After graduating from Lexington High School in Massachusetts, Luke moved to Philadelphia, Pennsylvania to attend Esther Boyer School of Music at Temple University on an academic and music scholarship. There he studied under Terrell Stafford, Mulgrew Miller, Bruce Barth and many other world-renowned jazz educators. Before graduating in 2004, Luke had fully immersed himself on the Philadelphia jazz and r&b scenes, as well as made a name for himself on the nearby New York scene. After graduating, he recorded and/or toured with Curtis Fuller, Dave Valentin, Billy Paul, Slide Hampton, Nicholas Payton, Fred Wesley, Red Holloway, Steve Turre, Musiq Soulchild, Carol Riddick, K’naan and many others. Luke has released 3 albums as a leader; ’Living In The Now’ (2011), ‘3 Suites’ (2013) and most recently, ’I Too, Sing America: A Black Man’s Diary’ (2021). Between the 3 albums, he has recorded over 20 original songs. Recently, in 2017-2018, Luke was chosen to be an Artist-in-Residence for Philadelphia’s prestigious Kimmel Center for the Performing Arts. He is currently a teacher for the Kimmel Center, as well as the University of The Arts (Philadelphia).

Alex Shaw is a Philadelphia-based percussionist, sound artist/composer, cultural producer, and arts educator working in the field for over twenty years. Intercultural, interdisciplinary collaborations and compositions merging diverse percussion traditions, vocal textures, field recordings, and digital imagination encompass his current artistic focus. He is the director of renowned Brazilian ensemble, Alô Brasil, and was a section leader in the award-winning Spoken Hand Percussion Orchestra for over a decade. Alex has produced dozens of public performances and cultural programs including Consciência Negra: The Legacy of Black Consciousness in Brazil, a 3-day symposium at Swarthmore College in 2016 that culminated with his original interdisciplinary production, The Mandinga Experiment, in homage to Capoeira Angola and its legacy of cultural resistance. He is a faculty member at University of the Arts, the former Artistic Director for Intercultural Journeys (2014-2020), and Co-Director of Modupúe | Ibaye: The Philadelphia Yoruba Performance Project. Alex has received several competitive artist grants and an Emerging Legacy Award at the UPenn MLK Commemorative Symposium for Social Justice. He holds a BA from Swarthmore College and an MFA in World Percussion from the California Institute of the Arts. Alex is a founding board member and lead teaching artist for World Cafe Live (formerly LiveConnections) since 2008.

Thursday's post-show conversation with the creators will be moderated by performance curator and dramaturg Arielle Julia Brown.

Arielle Julia Brown is a creative producer, social practice artist and dramaturg.  Emerging from her work and research around U.S. slavery, racial terror and justice, Arielle is committed to supporting and creating Black performance work that commands imaginative and material space for social transformation. She is the founder of The Love Balm Project (2010-2014), a workshop series and performance based on the testimonies of women of color who have lost children to systemic violence. The Love Balm Project was developed and produced at cultural institutions throughout the San Francisco Bay Area and Atlanta.  More recently, Arielle developed The DoubleBack, a site specific performance about three enslaved Black women in Providence RI while in residence at the Center for Reconciliation. She is also the founder and creative producer of Black Spatial Relics, a new performance residency about slavery, justice and freedom. Arielle is a co-creative producer on Remember2019, a performance and residency project based in Phillips County, Arkansas.  Arielle’s work and writing on Black political performance has been published in the anthology Revolutionary Mothering: Love on the Frontlines, ARTS.BLACK and Public Art Dialogue among others. Arielle was a 2017-2018 Diversity and Leadership Fellow with Alliance of Artists Communities. Arielle was a 2019 Monument Lab National Fellow and has joined the team as a Performance Curator. She has recently served as both the Public Programs Developer at the Penn Museum and as a cultural planning consultant for the Penn and Slavery Project at the University of Pennsylvania. Recent dramaturgical credits include What We Ask of Flesh (Inspirit), Live! At the Crescendo Club, Grounds That Shout! And Others Merely Shaking (Fist and Heel Performance Group, Partners for Sacred Places and Philadelphia Contemporary) 2019 and SaltPepperKetchup (InterACT Theatre) 2018. She is currently the co-curator of Staying Power, an outdoor art exhibition and program series led by The Village of Arts and Humanities and Monument Lab. She received her B.A. from Pomona College and was the 2015-2017 graduate fellow with the Center for the Study of Slavery and Justice at Brown University where she received an M.A. in Public Humanities. To learn more about her work visit her website here. 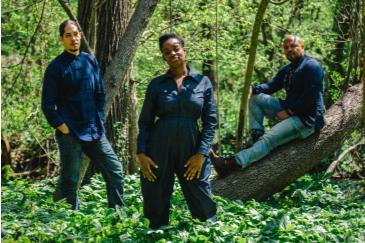