Rosebud is a Grateful Dead band of a different kind. Rather than reserving their talents for only the same-ole Dead tunes that every other Dead band plays, Rosebud captures the sprit of a true Dead show by surprising audiences with original material, Dylan, Van Morrison, Kingfish and other material that would fit right in with the Dead… and all played in the Dead’s style. "Expect velvety three-part vocal harmonies, tight virtuosic jamming, and an excellent repertoire from this cadre of veteran players,” wrote the New Times in San Luis Obispo. "If you're a Grateful Dead fan, you can't go wrong. "
The band features original DSO drummer Mark Corsolini, and China Cats founding guitarist Scott Cooper, who's first CD reached #5 on the national jam band radio charts and his subsequent three other CD are KPIG standards including the hit song “Ghosts of La Honda.” Lead guitarist Fred Rodriguez and bassist Andy Birchett are also familiar to music lovers as is band namesake pianist Lachlan “Citizen” Kane. 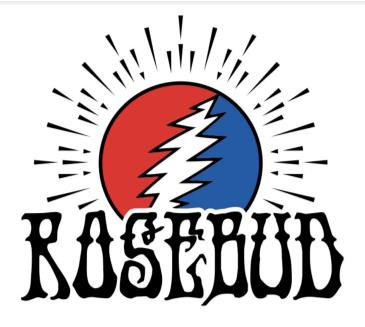