When Sidelong, Sarah Shook & the Disarmers’ debut album, was released in early 2017, it quickly earned kudos for its blast of fresh, fierce honesty and sly wit. It was a welcome new voice in a genre too often mired in the staid and conventional. And while that record may have come to many as a surprise, 2018's follow-up, Years, solidifies the point: Sarah Shook & the Disarmers have moved from getting people’s attention to commanding it.

North Carolina’s Sarah Shook sings with a conviction and hard honesty sorely lacking in much of today’s Americana landscape. Always passionate, at times profane, Sarah stalks/walks the line between vulnerable and menacing, her voice strong and uneasy, country classic but with contemporary, earthy tension. You can hear in her voice what’s she’s seen; world weary, lessons learned—or not—but always defiant. She level-steady means what she says. Writing with a blunt urgency—so refreshing these days it's almost startling—Sarah's lyrics are in turn smart, funny, mean, and above all, uncompromising. Sly turns of phrase so spot on they feel as old and true as a hymn. Anger that's as confrontational as it is concise. Humor that's as wry and resigned as a park bench prophet.

The Disarmers hit all the sweet spots from Nashville’s Lower Broad to Bakersfield and take Sarah's unflinching tales out for some late-night kicks. At times, it’s as simple and muscular as Luther Perkins’ boom-chicka-boom, or as downtown as Johnny Thunders. The Disarmers keep in the pocket, tight and tough.

Sarah Shook & the Disarmers have been covered by the likes of Rolling Stone, The FADER, Noisey/VICE, The Wall Street Journal, and more.

This is a new voice for a new country.

“From the age of 7, Izzy began immersing herself in a world of traditional folk and labyrinthine guitar  music generating an inseparable obsession. Even still often preferring time spent with her guitar over socializing, meals and sleep. Although currently residing in hill country of Kerrville Texas, Izzy (now 21) travels frequently as a one woman band with a kick drum, foot tambourine and unyieldingly raspy yet tender voice; silencing and enticing rooms wherever she ventures.”

Lead singer and acoustic guitarist Jason Cline had an elaborate epiphany when he was living in Portland, Oregon. As he walked from to St. John's Bridge from his house, Cline found a number of feathers. Thinking nothing of it, he picked them up and put them in....the front pocket of his shirt. The next night, - still wearing the same shirt with the same feathers from the day before - Cline was attending a Holy Smokes and the God Forsaken Rollers show. Cline's buddy Johnny Holliday was talking outside, "I'm gonna put microphone in my banjo and rap into it. I'm gonna be Banjomouth." Cline looked down at the feathers in his pocket and replied, "yeah, and I'll be Featherpocket."

Featherpocket is a 5-piece band, consisting of Spencer Bloodworth on pedal steel guitar, Clint Lemonds on banjo, Ryan Collins and Cliffton Bundick on the bass, Jason Cline on acoustic guitar, and Jacob Bohan on the drums.

​Featherpocket has performed across the nation in North Carolina, Virginia, Tennessee, ​Texas, Colorado, Oregon, Washington, and California, and has shared the stage with the likes of Lillie Mae, the Blackfoot Gypsies, Boy Named Banjo, Travers Brothership & many more. 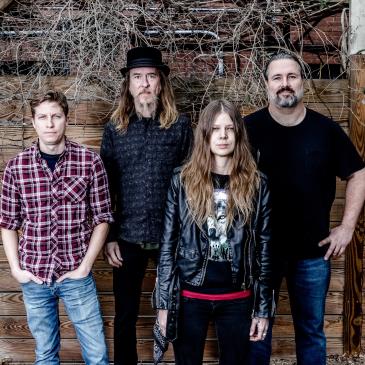