Two Nights of The Guitar Star himself...

“The Bruce Lee of Rock and Roll” –Tahoe Onstage
“A modern day Jimi Hendrix” –Chico Enterprise
“It’s not every day we get to see a real, live guitar god in action.” -Fly Magazine (Pennsylvania)
“A wildly creative virtuoso.” -Jambase.com
“Stand out artist at this year’s High Sierra Music Festival” –Relix Magazine.
“At a festival FULL of guitarists (Safeway Water Front Blues Festival), none played like Pemberton or was as fun to watch” -The Oregonian

Portland’s Scott Pemberton is not your average guitarist. He’s a musical nomad. His home isn’t in one comfortable bubble, but rather spread across genres. One moment, he’s shredding through the blues. Then next, he’s living in a classic rock world, or drifting melodically through an ethereal psychedelic plane. Maybe he’s leading a dirty funk jam, or experimenting with something heavier, or sitting back on a jazz odyssey.

Regardless of genre, though, Pemberton’s musical journey is marked by two unmistakeable realities: You always know when you’re hearing a Scott Pemberton song. And you’re always going to be captivated.

A Portland native, Pemberton and his guitar have been inseparable since the musician was in his teens, and he quickly established himself as an integral to the city’s musical fabric, sitting in on studio sessions, becoming a fixture at jazz and rock clubs, and taking guitar teaching positions at Lewis & Clark College and Reed College at age 21. So much a part of Portland’s fabric is Pemberton that the city’s famous Voodoo Donutes gifted him a custom guitar-shaped donut for his birthday.

Jake Nielsen’s Triple Threat is a little bit of Stevie Ray Vaughan. a little bit of the Chilli Peppers and a little bit of Sublime.  Together these 3 Men have become a Triple Threat to the music scene!  They are a genre bending group with the ability to entertain any crowd in front of them, no matter what age.  Front man Jake Nielsen has been inspiring people with his talent and ability to rise above all obstacles since he was very young.
Born on march 29 1985. Jake was born with cerebral palsy, limiting the use of his legs. He was always determined to never let that bring him down…
Generating a lot of attention for his live performance, with so much energy and funk you have to get out of your seat and dance!  With this album Jake played all over California, opened for big names such as Elvin Bishop, Roy Rogers and Travis Warren of Blind Melon.  And also making his international debut in Canada,   Also his song ‘Drinkn Blues’ was featured in a short film called Bondi Blues with Dan Aykroyd.
These days Jake is touring with Kyle Talty on drums and Dave Palmer on bass, two of his oldest jamming buddies.  Together these three have accomplished many great things!  And also bringing back his reggae roots between the funk and blues! 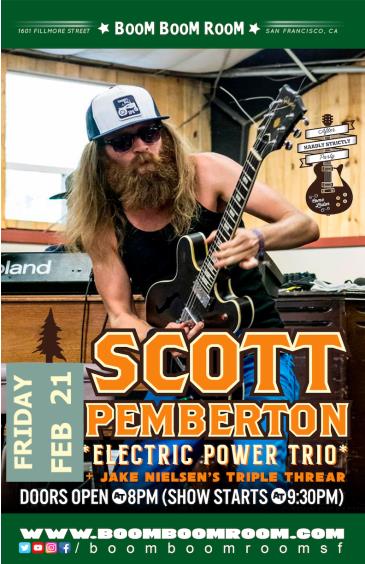