Neighborhood Theatre and MaxxMusic are proud to partner with SEAN MCCONNELL to bring you access to a special livestream performances on May 13 and May 27 at 8:30pm ET!

Join Sean McConnell for A Horrible Beautiful Stream, a special three-night virtual concert series from his Silent Desert Studio in Nashville, TN. Beginning Thursday, April 29, night one will feature songs from Secondhand Smoke and Sean McConnell. Thursday May 13 will feature songs from Saints, Thieves, Liars and Midland. The final show on Thursday May 27 will feature brand new songs from the forthcoming A Horrible Beautiful Dream, as well as b-sides and songs he’s written for other artists. Purchase tickets for one, two, or all three unique shows - the VIP option includes a virtual “Cocktail Q&A” after each show.

A portion of each ticket sold benefits Neighborhood Theatre/MaxxMusic.

Peril exists in both the underexamined and overexamined life.

Claiming to have all the answers may appear to hold a premium in life in the 21st century, but finding even one flaw in that claim threatens to crack the entire edifice.

Similarly, building a life out of nothing but an endless stream of questions while also afeared of gathering answers leaves one paralyzed into inaction.

Life is rarely black and white. Nor is it almost entirely gray.

The dichotomy of balance, amidst the turbulence of the to and fro life’s situations warrant, is a central theme of singer/songwriter/producer Sean McConnell’s newest collection, A Horrible Beautiful Dream.

Sean McConnell is a man unafraid of asking questions of the situations in his life. It manifests itself from the moment he wakes each day, on a small farm outside Franklin, Tenn., a very different environment than his upbringing in Massachusetts.

“No, I didn’t grow up like that at all,” McConnell laughs. “But my wife grew up on a farm. She’s more used to it than I am.

“We’ve got pigs and chickens and some acreage.We are growing a garden and such.The older we get, the more we want to just kind of be self-sufficient. We enjoy getting our hands dirty and getting out into the woods and taking care of animals. It brings us a lot of joy and grounds us.”

A central feature of the small, well-appointed house is a wood-burning stove that provides much of the heat to the structure. There is both beauty and function in the process of maintaining the stove’s output in the colder months, something that parallels McConnell’s work in his studio a stone’s throw away, asking questions of both his own work and those with which he collaborates.

“Time seems to breed creativity, especially when there’s very little else going on,” McConnell says of the stillness brought about by the events of 2020. “Other than this record of mine, I’ve produced records for four other artists out of my studio.

“This period has forced everybody, internally and externally, globally and socially, to take a good look at our lives and examine it,” he continues. “Everything from our marriages to our workout routines,social injustice to planet politics and religion, spirituality and our internal environment…everything has come to the surface. It’s been the tipping point of so many things right now, so obviously that bleeds over into art and music.”

If there’s an overworked word surrounding the previous year, it’s been “uncertain.” (“Unprecedented” might run a close second.)

There comes a moment we must admit to ourselves that we don’t have a clear picture of what’s happening around us. It’s the thread that not only ties the entirety of A Horrible Beautiful Dream, but also one of the standout tracks, “Nothing Anymore.” 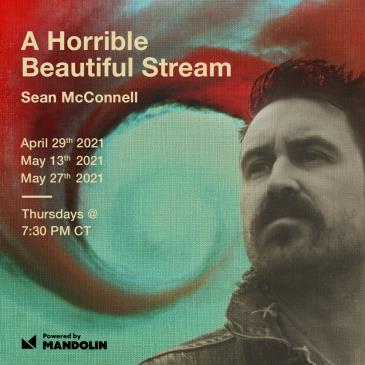