with special guest To Be Announced

It’s been a long time in the making for Haley Dahl, who has been performing as Sloppy Jane since she was a teenager. In those days, Sloppy Jane was a three-piece punk band. Its earliest members were Phoebe Bridgers on bass, Sarah Cath on guitar, and Imogen Teasley-Vlautin on drums. Now the band has over a dozen members, and has transformed into a chamber pop project. Dahl also learned so much as a musician: on Madison, she learned how to write for chamber instruments and taught herself the piano. The record is difficult to categorize. It’s David Bowie but also when the song “Crying,” by Roy Orbison plays at the end of Harmony Korine’s Gummo. It’s My Chemical Romance meets Sgt. Pepper. Courtney Love and Queen. The record is a huge, flowery, velvety thing full of toy horses and stalagmites. It follows one major throughline: a grand gesture so large that it moves the whole Earth.

Dahl and her 21 bandmates recorded all of her Saddest Factory debut, Madison, in West Virginia, at a place called Lost World Caverns. To access the space, they’d enter through the back of a gift shop, down a long tunnel where they’d walk down 200 feet of stairs to reach the entrance. Dahl and her bandmates did this steep walk with a piano. The ceiling of Lost World Caverns is massively high and is a perfect dome. The inside was also 98 percent humidity, leading to both stellar sound and also problems with tuning and gear. Engineer Ryan Howe sat in his parents Subaru above the cave with his mixing board and computer, and threaded cables down 90 feet through a hole in the ground to the ceiling of the cave. It’s the first time someone has ever recorded an entire album in a cave, and the results are pretty sonically stunning. That alone is a marvelous thing. Madison is an astounding, glorious record of melodrama of the highest order. https://sloppyjanemusic.bandcamp.com/ 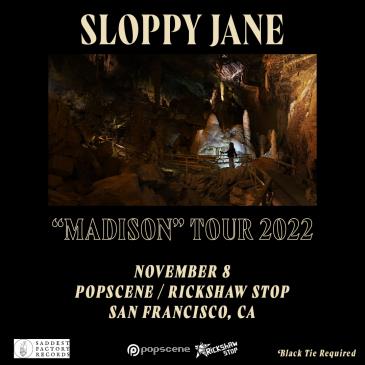