Who are Sorry? A gang of fools consisting of Asha Lorenz and Louis O’Bryen, Campbell Baum, Marco Pini and Lincoln Barrett. They have been making music together since their teens, have released one acclaimed album, a batch of singles and a series of videos co-directed by their songwriter and vocalist, Asha and her best friend Flo Webb (FLASHA Prod). Emerging from Brixton’s Windmill scene, where they played alongside Shame, Goat Girl and Black Midi, Sorry have created their own distinctive musical world – one that draws together a shared passion for lo-fi sounds of grunge, trap, and shoegaze.

Sorry are a band with a devoted following on both sides of the Atlantic. Their 2018 single ‘Starstruck’, with its hook of a blocked throat clearing itself, has over 7 million plays on Spotify. The jittery ‘Cigarette Packet’ was arguably one of the best singles of 2021, with a video featuring an array of smokers with varying degrees of bad teeth. It’s a simple visual device, elegantly executed. https://sorryband.co.uk/

With their debut album Collector, the Wisconsin-bred alternative rock outfit DISQ seemed to have everything required to take the world by storm. They had the full support of revered veteran indie label Saddle Creek. They’d received favorable notices from outlets such as the NME, the Guardian, and Stereogum. They had an energetic live show which was sure to convert a sea of devotees, and an international tour booked to prove it. Most crucially, they had an album of winning and memorable rock songs, polished to a fine sheen by legendary producer Rob Schnapf. You could not fault these five fresh-faced youngsters for betting it all, but their big mistake was one that no musician could have seen coming : their release date, March 6th, 2020. Within days, the world Disq was poised to conquer ceased to exist.

Undaunted by a storm of misfortunate which would have crushed a lesser band, Disq now returns to take what is rightfully theirs, with their sophomore effort Desperately Imagining Someplace Quiet, a record which reaffirms the charms of Collector while pushing the sound and dynamic of the band in exciting and unexpected new directions. Rather than splintering and surrendering to their cursed circumstance, Disq has emerged a stronger band, more daring and more defiant, ready to finish the job. It is fitting that the clever backronym effectively makes this the band’s self-titled album, as it introduces the public to a new Disq, a band both seasoned by experience and newly invigorated toward vivid new heights.

Pushing play on Desperately Imagining Someplace Quiet, it is easy to imagine that it is the year 1998, and your cool older sister has returned from her freshman year at college only to hand you the sort of mind-altering mixtape out of which lifelong rock fanatics are born. It is the sort of record Beck might have made in his prime, if you swapped out the hip-hop and delta blues of Odelay for midwestern emo, Scottish power-pop, and the sort of all-American indie that functions as “classic rock” for this cherubic cohort. https://www.thisisdisq.com/ 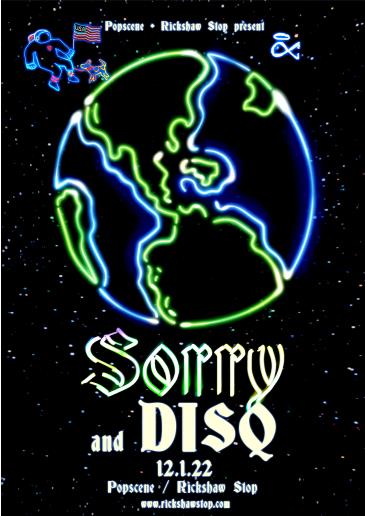