Nieve says, "It’s with huge pleasure, happiness, and excitement that I can announce my good friend Benmont Tench, founding member of the Heartbreakers, Works Progress Administration, keyboards on The Who album out this month, this maestro of the piano is joining us on stage at Largo on the 18th of Jan”. Prepare yourselves for some 4 handed keyboard magic! And some deep song choices.
Steve Nieve member of the rock and roll hall of fame, has been playing keyboards for ElvisCostello for more than thirty years, firstly as a member of The Attractions, and in morerecent times with The Imposters. Steve worked on all but three of Costello’s 30 studioalbums, including those with Burt Bacharach and Anne Sophie von Otter. Other artistsSteve’s keyboard stylings have graced include the Neville Brothers, Hot House Flowers,Graham Parker, Squeeze, Tim Finn, Kirsty MacCall, Madness, Nick Heywood, Morressey,David Bowie, Vanessa Paradis, Sting , Alain Bashung and others.

Perhaps the most intimate and riveting performances, however, were those where Elvisand Steve toured together creating a spellbinding tour-de-force of piano, guitar andvoice. Anybody who has witnessed these or indeed any of Elvis Costello's live shows willappreciate the special magic that occurs when Steve Nieve is let loose to solo on thepiano.

Now, finally, get to experience a full evening of this magic as Steve and his piano takecenter stage. “Steve Nieve plays Elvis Costello with special guest Ajuq” and a whole lotmore. You will hear themes from Steve’s piano solo records “Keyboard Jungle” “It’sRaining Somewhere” “Lazy Point” - from “Windows” from “Welcome to the Voice””. Ajuqcontributed to every track on “Together” and in his own inimitable vocal style will singsome unexpected Costello songs.. Ajuq will also share some of his songs in a strippedbare unplugged mood. He just returned from a tour in Taiwan with a traditional TaiwaneseOrchestra playing Ajuq’s music. Steve Nieve joined him in this adventure. Steve and Ajuqalso plan to perform some Mark Hollis songs in tribute to the leader of Talk Talk.

A great new concert to discover.

Will Call Opens/Seat Assignments Begin: 6:00PM | Doors Open For Drinks: 7:00PM | Showtime: 8:00PM
When you arrive at Will Call on the night of the show, seats will be assigned first come first served, from the front of the theatre to the back. If you want to sit closer, be sure to come earlier. 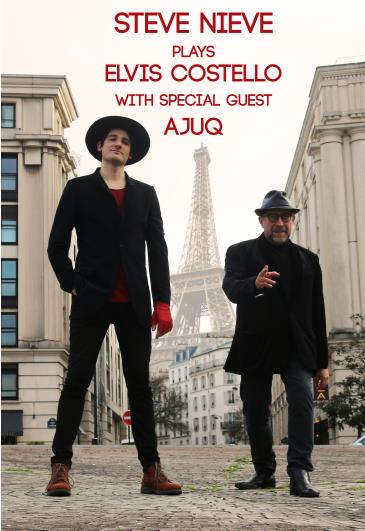