These highly regarded Cali bands with take you on a journey that will leave you blissed out and sweaty from a rockin' dance floor that just wont quit.  These two bands will be trading sets with each other and feature some amazing collaboration, while taking you from Africa, to New Orleans, from the grit of 70's era soul to a modern take on World beat.  Don't miss this special night of music and celebration.

SUN HOP FAT
For years Sun Hop Fat has been at the forefront of introducing the unique sounds of Ethiopian Jazz to the masses. The music blends the rhythms of traditional American funk (James Brown, Parliament) and jazz (Yusef Lateef, Miles Davis) with harmonies and melodies from East Africa. The result is an up-tempo groove machine that borrows harmonies from the Middle East. The music focuses primarily on arrangements from the “golden era” of Ethiopian Jazz but includes original compositions as well. This all-star band includes standout musicians from other popular San Francisco Bay Area groups.

Sun Hop Fat has developed a solid following throughout Northern California by playing a number of clubs and festivals. The ability of the band to captivate sit down jazz crowds as well as steal the spotlight in prime festival slots, encouraging crowds to get up and dance, makes the group flexible in its appeal and garners support from diverse audiences.

OBJECT HEAVY
Blazing out of the North Coast of California with a diverse assemblage of hypnotic rhythms to spark up any dance floor, Object Heavy delivers a uniquely heavy sound that fuses Progressive-Soul, Rock and R&B in a strikingly fresh way.
After spending the past two years touring throughout the pacific northwest, Object Heavy’s contagious sultry funk has garnered a momentum and buzz that shows no sign of letting up. In it’s short time Object Heavy has had the honor of sharing the stage with heavy hitters like George Clinton and P Funk, Cheech & Chong, Orgone, Flobots, Polyrhythmics, Karl Denson’s Tiny Universe, Afrolicious, Delhi 2 Dublin, March 4th Marching Band and even backed up legends like Fred Wesley, Chali 2na, Raashan Ahmad, John Popper, DJ Logic and more.
Object Heavy is exploding onto the scene with their sights set on reaching the ears and hearts of a connected global community that is looking to groove, dance and love. Get down with the highly infectious soul of one of Northern Cali’s most prolific and entertaining bands, Object Heavy.
https://www.instagram.com/objectheavy/
https://www.facebook.com/objectheavy/
https://www.youtube.com/watch?v=AFaDtwzh0I8
www.objectheavy.com 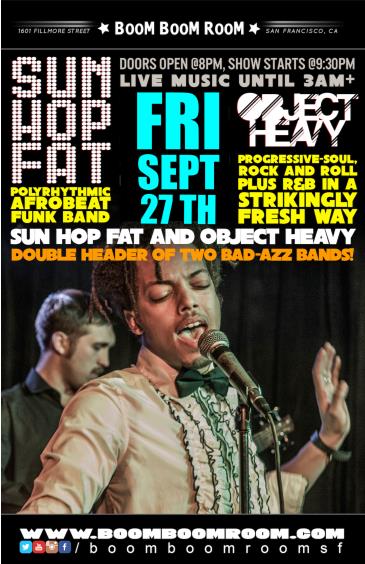