Somewhere between a solo bedroom-pop act and an indie rock quartet, Super Cassette has specialized in producing driving, insidiously catchy garage pop since 2016. Starting as a solo recording project called “Maximillian”, Super Cassette quickly blossomed into a proper rock band. Max Gerlock put a band together to play live, and the incredible chemistry they discovered (along with the cease-and-desist letter that forced them to change their name) made it apparent that Super Cassette would function better as a band than as a solo project. https://supercassetteband.bandcamp.com/

California native LOUIZA is one of indie music’s best rising pop singer-songwriters. Acclaimed by top music tastemakers like Billboard, The Line of Best Fit, and The Deli SF, she’s at the forefront of music innovation and discovery. Her sound is best described as a charismatic blend of jazz and electro-pop with an underlining hint of alternative rock. Vocally, she’s inspired by legends like Joni Mitchell and Kurt Cobain, who she’s been highly compared to by fans and media. While she maintains a distinctly pop backbone, LOUIZA plays around with fresh concepts for each new project. Fans should look out for her latest releases including her single “Anomie,” and On, Off EP, out on all major streaming platforms as of June 26. https://www.louizaband.com

The Bribes is the project of Chicago-born, San Francisco-based musician Philip Toscano. The Bribes are a classic rock-n-roll three-piece, featuring Toscano on vocals and guitar, Jesse Strauss on bass and Anthony Puducay on drums. The trio regularly perform in the Bay Area and beyond. https://thebribes.com/ 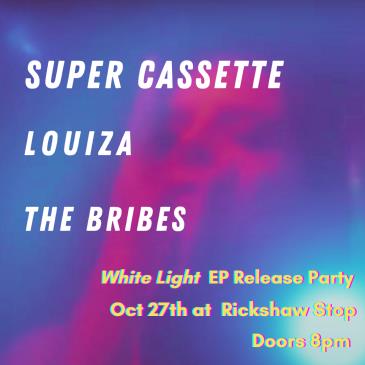