Those of you who are familiar with films like The Wizard of Oz and The Prestige might relate: themechanics behind the magic can be just as compelling as the smoke and mirrors themselves. Justask Montreal outfit SUUNS.

As a band who have been around for thirteen years and toured allcorners of the world, there comes a point where the veil needs to be fully lifted. Up till now, theexperimental rockers have reveled in mystery like a silhouette disappearing into the mist, puttingout albums that rest comfortably in ambiguity, detachment, and innuendo. But lately, SUUNSappear to be more comfortable coming clean with their own inner workings. “This is a very geekything,” singer/guitarist Ben Shemie delineates. “But we never really commit to a certain kind oftonality.

Whether it’d be major or minor, there's always a certain kind of evading of what yourown expectation is.”

Nevertheless, SUUNS’ fifth full-length album The Witness – their first for Joyful Noise
Recordings – once again marks a shrewdly offbeat left turn. The tried-and-true narrative for aband of this nature is always to ‘move to the deep end’ or ‘out of the comfort zone’. In some waysthat rings true on The Witness, though one could say these eight movements actually show SUUNSin their most comfortable, candid state. Self-recorded and self-produced over the majority of 2020– a year of strife, solitude, and reflection –, The Witness finds the band holding a magnifying glassover their own default state of playing and performing. It’s a swift departure from previous albumFelt, which exults in harvesting haphazard ideas in their embryonic, demoed versions, as if lettingloose a glorious fireworks display into the heavens.

The Witness, meanwhile, pours SUUNS’ music into a more intricate mold, compelling Shemie tounravel himself lyrically in a much more pronounced fashion. “There’s something interestingabout the idea of a collective witness, being a witness to the time we’re living in now,” he reflects.

“And the connectedness of what we all have in common. But also, literally: bearing witness to allsorts of things and how that desensitizes you. There’s a recurring line that comes back on therecord: “I know that you’ve seen it too.” A song like ‘Clarity’ is also about pulling the veil off andseeing things for what they really are. It kind of comes down to being true to yourself andacknowledging what is and isn’t real.”
Opening cut ‘Third Stream’ experiments with jazzy brass and prowling piano flourishes akin toTalk Talk’s Spirit of Eden, sounding like a band being profoundly present, being a witness tothemselves in some respect. “These songs are a little more expansive-sounding”,
drummer/percussionist Liam O’ Neill comments, “And I can imagine that if we get to play themlive, they’ll probably be even longer.

But that was the general idea, to the extent that we neverhave an intentionality behind what kind of record SUUNS is going to make. After Max (Henry)left, being ten years in the game, we felt a little bit exhausted by that endless album/tour cycle.

Night after night, we realized: ‘We’re really just playing a bunch of songs.’ With The Witness, we
tried to do something a little more immersive and longform. That’s the reason we always lovedplaying ‘Edie’s Dream’, because it’s like a whole environment you step into. Or just incorporatingdrones we freely improvised. Those moments were always our favorite parts during live sets. It feltlike both us and the audience were part of this whole wave that was happening.”

Perhaps unintentionally, SUUNS have always been a strangely intimate band, and with The
Witness, they themselves became aware of the extent of this. More than ever, SUUNS keeps thosespontaneous moments in the album recordings. “We just do that more improvised stuff so naturallylive,” Joe Yarmush adds. “It’s kind of weird that it hasn’t been a big part of our albums up tillnow. We’re trying to embrace that side of the band for sure. That’s also part of SUUNS just beingthe three of us now.” Though Max Henry had left the band in 2018, he still contributed materialto the album, most notably on ‘Witness Protection’. O’ Neill: “Max is such a brilliant musician,but it became clear he wasn’t into the touring lifestyle anymore. He wanted to go back to school;right now he’s studying music psychology. Which is much more of what he’s supposed to do.”

With one member down and Shemie now living an ocean apart in Paris, a fresh challenge
manifested for the trio to find each other again, both socially and creatively. More than any otherSUUNS record, The Witness employs a jazz mentality of designing a continuous vibe over thenotion of separate chapters. There’s a level of relaxation, of accepting the band’s primal instincts,and a concentrated attempt to maximize and revise said instincts. Yarmush: “It was a consciousdecision to make the album sound like one song. We wanted to calm down a bit, even during themixing process: our notes were simply ‘you have to settle down’. I couldn’t technically explainwhat I meant by that, but the songs needed to settle down. We were basically trying to hold backall the bombastic tendencies and make things sound very subtle.”

The ethereal ‘Timebender’, which materialized out of vastly disparate parts, still entertains the
idea that you’re tapping directly into the band’s inner pulse. ‘Go To My Head’ captures SUUNS
at its most outright gorgeous, albeit habitually elusive. “Those guitars at the beginning are very
much classic rock, definitely a Fleetwood Mac ‘Albatross’ kind of vibe,” Shemie comments. “I
wanted to put that song out last, but I was voted out. It was difficult to put together because we puta lot of material into this song. It wasn’t like learning three chords and a beat.

There are a lot ofdifferent parts. Ultimately, it came together beautifully. I’m very proud of that one.”Though the world is becoming a more distorted, confusing place, The Witness extends a soniclifeline to latch onto, one bolstered by years of friendship, chemistry, and trust. For a band knownfor its cryptic magnetism, this album marks SUUNS’ most generous, stripped-down, and affectingwork to date. Shemie: “There’s always this restraint in SUUNS: the question of ‘how long can wehold off?’. I think it's beautiful that way because it always brings out something unexpected. Butif you’re willing to stick with us – at a show or through our music in general – it will pay off. It
might take a while to get there, but we will drop a beat for you eventually. I love that we’ve been
able to stick to the minimal side of things, and just let it breathe.”

Mexico’s Lorelle Meets The Obsolete conduct a mind-blowing experiment in restrained noise. Bringing their intense new album ‘De Facto’ to the stage they now push electronics to the fore of their wall of sound. All elements (the surging guitars, clattering electronic beats and heavy live rhythms) coalesce into a wave of sound, like an acid rock Factory Floor. 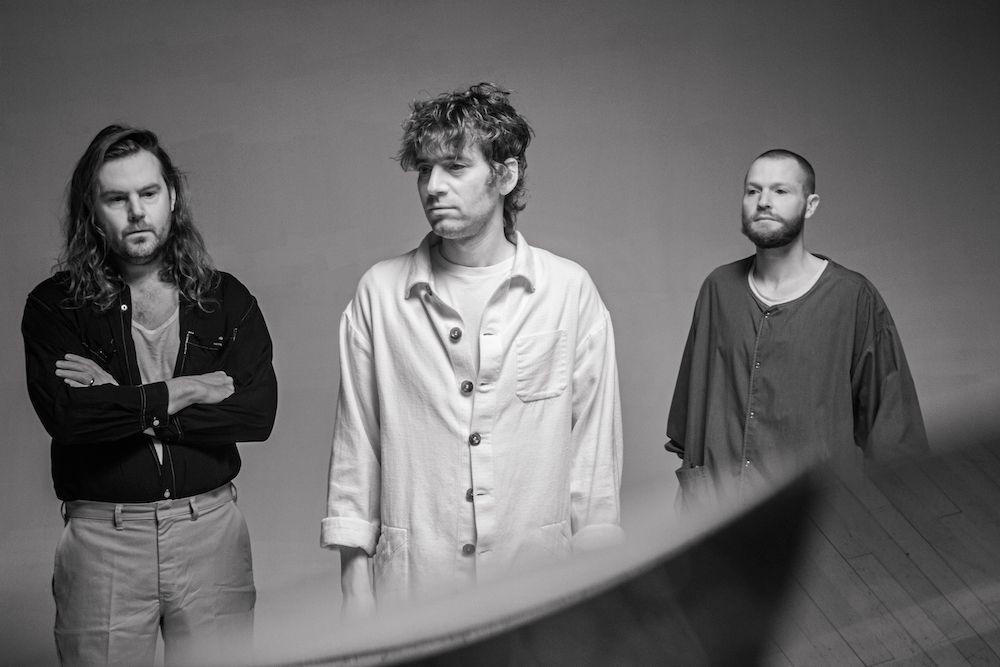