Sam Evian knew he wanted to leave New York City almost as soon as he arrived, more than a decade ago. An upstart songwriter and producer, he, of course, loved its creative wellspring—the ideas, the instrumentalists, the energy. But he’d grown up in the woods of upstate New York and, later, along the coast on the rather empty eastern end of North Carolina. The city was expensive, anxious, and unsettling, however inspiring it could be.

So in the Summer of 2017, he and his band decamped to a rented house upstate to cut his second album, the magnetic You, Forever. He then realized he could no longer resist the urge; two years ago, Sam and his partner, Hannah Cohen, split from the city, building their refuge in the quiet of a Catskills town. That reflective, relaxing environment inexorably shaped Time to Melt, his third LP and debut for Fat Possum. A glowing set of soulfully psychedelic pop gems, Time to Melt is a testimonial to the life and wisdom to be found when you give yourself the mercy of space.

During the last decade, Sam has become a preeminent collaborator, producing and engineering records for the likes of Big Thief, Cass McCombs, and Widowspeak as Sam Owens, his given name. In their new home, he and Hannah hosted bands like house guests as he helmed their sessions. The coronavirus, though, clamped down on those interactions, largely sealing the couple from their longtime scene.

So Sam tried something new: He sorted through more than 60 instrumental demos he’d recorded in the last two years and began shaping the most enticing of them into songs with help from Hannah and a cadre of long-distance friends—Spencer Tweedy, Chris Bear, Jon Natchez, even strangers who sent him voice memos via Instagram. He took the unexpected time at home to dig deeper into his world of sounds and ideas than ever before, calmly considering our moment of prevailing chaos through a lens of newfound distance.

But the last few years have been purely happy for mostly no one, Sam included. Time to Melt reckons with the weight of our time, even when it sounds largely weightless. Inspired by John Coltrane’s mixture of grace and gravitas and Marvin Gaye’s uncanny ability to turn social issues into personal anthems, Sam strove to give these otherwise-beguiling instrumentals the thoughtfulness and depth these days demand.

With its rubbery bassline and sweeping strings, “Freezee Pops” unfurls like a Summer breeze. It reads, though, like poetic testimony on police brutality, an innocent kid’s life plundered for prison-system profits. And “Knock Knock” taps Sam’s memories of race-and-class violence in the small-town South and his subsequent reckoning with our crumbling American façade, where “we tell ourselves almost anything but the truth.” The song is ultimately a tribute to the perseverance of the vulnerable, who find community and joy in spite of the way centuries of miscreants try to deny it.

There are also songs of utter celebration on Time to Melt, paeans to whatever joy it is we find in life or love. Buttressed by bold baritone sax, lifted by exuberant trumpet, and washed in fluorescent guitars, “Easy to Love” is an exultant ode to finding a new paradise outside of the city, an idyllic setting where you can plant love and literally watch it bloom. “Lonely Days” blows in with a muted brooding, but it’s a feint for Sam’s sweet hymn to a blissful partnership of shared solitude, a true blessing for a year when so many have been alone. “Lonely days are gone,” he repeats, his rhythm shifting just enough in the middle of the sentence to tease dejection and surprise with delight. Sam is so content in the Catskills that the lovely but warped “Sunshine” finds him imagining how heartache must feel, as though it were only ever a hypothetical muse. He sublimates a sense of seasick sadness into a compulsively funky oddity.

At home now near the Ashokan Reservoir with their new rescue dog, Jan, Sam and Hannah mostly listen to music while they cook dinner. That’s the kind of record Sam wanted to make—an album of sounds so pleasant and compelling that you put it on and follow the slipstream. He succeeded; Time to Melt is a waking dream, its intoxicating rhythms and timbral webs as settling, even seductive as an evening glass of wine. But making dinner, or whatever your ritual at day’s end may be, isn’t some idle exercise. It’s a place to unpack the pain and wonder, the suffering and promise of the moment, to reflect on where you have been and what might come next. In 40 striking minutes, or the time it may take you to make that meal, Time to Melt sorts through a year of a life spent in rage and hope, lockdown and love.

Maia Friedman: “Pour me over, show me how to begin,” intones Maia Friedman on the first track of her lush, immaculate debut Under The New Light. Following a breadth of experience as a collaborator and multi-instrumentalist, Friedman’s densely-textured pop is wise and evokes what she wants it to: the sensuality of touch, feeling and image, a sonic form of empathy.

As an ode to the shifting landscape of our own lives, Friedman began Under the New Light four years ago, while teaching music and performing in multiple New York bands. “Collaborating gives me the juice,” she says, laughing. In 2018 Friedman was asked to join Dirty Projectors and a heavy schedule of touring followed. She sang and co-wrote the lyrics for the first of their 5 EPs, released last year, most notably for the soothing earworm “Overlord.” Meanwhile, Friedman also formed Coco, which began as a collaborative recording project with Oliver Hill (Dustrider, Pavo Pavo) and Dan Molad (Lucius, Chimney) and they released music anonymously until the announce of their 2021 self-titled debut.

Friedman’s voice lends a unique quality of warm comfort that permeates all her collaborations, but Under the New Light presents her full intention. Her role is that of the wounded healer, one who has gained wisdom through darkness and grief. In her empathetic role, rather than share the details of any struggling, Friedman instead sought to build a cloud of safety for those who might have pain of their own. It’s an antidote to suffering rather than its depiction. The closest she comes to stark personal detail is on standout “Sunny Room”: “To be in a place that knows your mold / The tighter your hand the less you hold / You’re looking for a way to ease your mind / So you won’t make a mess of your good time.”

Growing up in the Sierra National Forest region of central California, Friedman lived with her mother, their two dogs and four cats, playing in the wilderness until evening when her mom blew a whistle for her return. The family moved to the southern California coast when she was ten where her father, a film editor, director and teacher, cultivated the home’s expansive music collection, gifting Maia a jazz album every birthday. Her mother, a Jungian Psychoanalyst, led a dream group and filled their home with books on mythology, symbolism and dream interpretation.

It’s this translation of the image into sonic reality that Friedman shoots for and achieves wholly throughout Under the New Light. On “Elevate Us,” a sparse, succinct ballad, Friedman lifts a simple moment of observation into the weight of the world: “listen to the woman on the screen, promising everything / I am left more or less the same, with or without it / Oh how they elevate us, not that it’s for real / But ah, the elevation I feel / like a flock above the wires, carried by the current / In with the breeze, out with the front / We watch the rising flood.”

As with her other projects, Friedman collaborated closely on Under the New Light as a trio with Tom Deis (Pineapple Room Studio) and Peter Lalish, with Dan Molad in a production role. They worked on the album sporadically across the country, in Omaha, New York, and Los Angeles. Friedman had melodies but left it open, with the trio co-writing the swirling harmonies together. The arrangements are less sparse than they feel and even when Friedman’s voice is accompanied by a single guitar, there are swirls of ambience and synthesized sound design building around her.

The album plays like a fulfilled journey, and though Friedman is still somewhere in the middle of her own, on Under the New Light her vision is fully formed. On the bright closer “A Sleep in the Garden,” she nods, for better or worse, toward the future: “I won’t look away / when you show me more.” 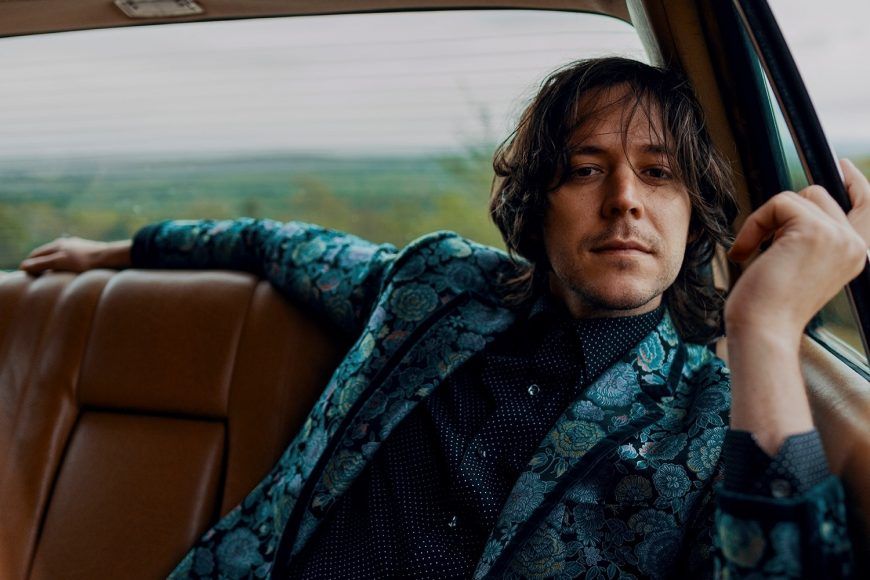