Sapphire Faded Genes
Website | Facebook | Instagram | Twitter | YouTube
Adrienne Hampton ‘aka” Sapphire Vocals The manager of Sapphire Faded Genes Band and a true Renaissance singer songwriter from Philadelphia. Her inspiration stems from a variety of “arts” through the years. Because of Sapphire’s singing versatility and her variety of singing styles, she enjoys performing music such as RnB, Jazz, Rock, Rap, Country, Blues, Reggae and Big Band music. Sapphire prefers marketing herself as Multi-Versatile Artist .As a young child she enjoyed mimicking singers such as Diana Ross, Donna Summer sand has recently fallen in love with Corrine Bailey Rae, and H.E.R. She often hears people say she has similar sounds and style as Jill Scott especially with her latest song released “No Justice No Peace”. To date, Sapphire has written over 20 songs in the last year. Sapphire completed her first musical project May 1, 2020 releasing her first album “Precious Gem” and has recently released her single “No Justice No Peace” July 31st.2020. This song received enormous reviews from people all over the world, blogs ,playlist, radio stations and WHYY PBS television and radio. This song was featured worldwide on the virtue “Wake Up Rise Up” world peace concert September 2021.December 2019, Sapphire performed for Peace Rally singing background on a mass choir for Dionne Warwick, Hezekiah Walker, Yolanda Adams and others. She believes music makes the world go round and should it always be fun!

Charu Siri
Website | Facebook | Instagram
The first Indian-born  jazz composer to premiere work at Carnegie Hall, Charu has been playing the piano since the age of five, and performing since the age of nine. She won an international piano competition at the age of 15.

Her recently-released "Book of Ragas vol. 2" is a completely original sound in jazz, and continues her work done in the first volume. In this new album, which was highlighted  by Jazz at Lincoln Center as an August new release, Suri uses her native Carnatic and Hindustani ragas (modal scales) as the basis for jazz piano improvisations, layered by Sufi singing. Her more classic album, "The New American Songbook" has garnered many awards, including a "Band Single of the Year" crystal trophy for her song, Bluesy, awarded by the International Singer-Songwriters Association (ISSA) in 2021.

She was also awarded a gold "Jazz Artist of the Month" record by ISSA.  Suri was recommended to join the Recording Academy (GRAMMYs) in 2021.

The trio consists of Charu Suri on the piano, Justin Lee on the double bass, Jay O’Brien and Jesse Gerbasi on the drums, and the vocal talents of Sufi singer Umer Piracha (Falsa) and Songbook vocalist Danielle Erin Rhodes.

​During the pandemic, she composed the "Book of Ragas vol. 2" that taps into the beauty of morning ragas, as well as several Songbook singles including "A Little Joy" and "Keep Dreaming."

She has started live gigs and completed tours recently in Miami, and is planning a big multi-city tour in India in 2022. 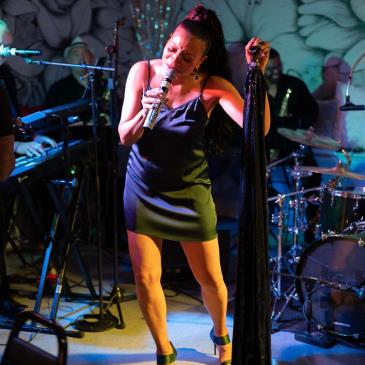