Satya:
21-year old songstress Satya debuts a beautifully transformational new EP Deep Blue (2022). Fusing Folk, Soul, and R&B this genre-bending project is guided by Satya’s soft vocals, stripped down production, and decadent prose to showcase the vulnerability that comes with relationships. The Oakland-born virtuoso hopes to highlight that growth isn't linear but rather a deep and on-going journey much like the 5-track EP. “I put Checker Print as the last track -- it's kind of like a reminder of the feelings we can always return to even if we're going through a hard time. That free, pure, child-like expression helps me work through some of the harder shit life throws my way. Reminding me that that type of expression is still inside of me. It’s a source of power and refuge; it is really healing and liberating”, said Satya. Satya’s new offering follows the release of her 2019 debut EP Flourish Against Fracture which has amassed over 890K streams on Spotify alone. Oakland, the first single from her new EP, was just featured as "Today's Top Tune" on KCRW and Ebro Darden at Apple Music. For Satya, music is meant to build community. It’s a truth she has leaned on throughout her blossoming career. Inspired by artists like Sade, India.Arie, Mazzy Star, Big Thief, and Corinne Bailey Rae, Satya is a highly creative, dynamic, ethereal artist who aims to thread together stories of healing and self realization through her music.

INSTAGRAM: https://www.instagram.com/satsatmusic/
WEBSITE: https://satsatmusic.com
Shavon Moore:
Hailing from Oakland, CA by way of Springfield, IL 25-year-old Shavon Moore’s talent has been undeniable since her early childhood. Growing up in Springfield’s Enos Park neighborhood, Shavon was forced to overcome racism, poverty, shyness, and family turmoil all before the age of 12. After her mom, Shrieeka Green, relocated to Oakland in her late middle school years, she ensured Shavon stayed away from street life, enrolling her in music enrichment after-school programs at the East Side Art Alliance Cultural Center. It was at the East Side Art Alliance Cultural Center in Oakland where Shavon first met legendary singer and educator Faye Carroll. Carroll would have a major impact on Shavon, eventually encouraging her to enroll at the California Jazz Conservatory in Berkeley, CA. After receiving a scholarship to the California Jazz Conservatory, Shavon began singing backups in local R&B, funk and soul outfit, C. Marcus and The Funky Spliff. After COVID-19 forced The Funky Spliff in hiatus, Shavon relocated to Fairfield, CA where she began recording her debut record, “Your Life”, produced by Napa Valley-based Tom “T-Bone” Muscatine (KC & JO, Snoop Dog, Suga-Fee). Released in April of 2022, and featuring collaborations with Hip-Hop legends Baby S and San Quinn, “Your Life” blends modern Hip-Hop and R&B with eclectic funk and soul.
INSTAGRAM: https://www.instagram.com/shavon_original/
LINKTREE: https://linktr.ee/shavon_original?fbclid=IwAR1Nb33lXf9DZ0-RotM8DfGnZg1O3IvivO4_MfwYWnHxcOV3L0BQkCmO-bA

August Lee Stevens:
August Lee Stevens is a Bay Area native Singer-songwriter and musician who is on the journey to self discovery. A classically trained pianist from Oakland School for the Arts, August finally found the courage to share her voice and original music when she started singing. Through her time studying in highschool and college, she was able to perform and work with artists such as Tammi Brown, Danny Glover, and Noname. After leaving she began her journey of writing her own music that showcases a blend of her favorite aspects of folk, soul, and R&B. She uses her music to reflect and communicate the emotions and lessons in life too big for words.  Her hope is that with music she can inspire others to speak their truths and leave the room feeling encouraged. She’s been touring throughout the Bay Area with her band and released her debut single "Senses" in September of 2022. 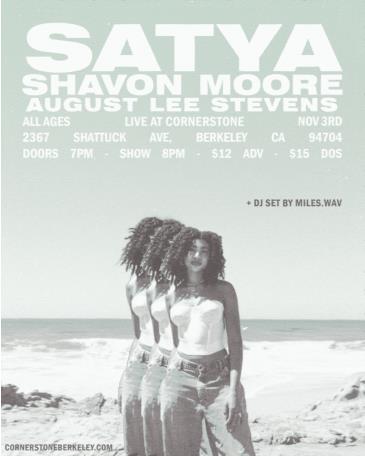