A fire burns deep inside the soul of award winning artist - SCOTT ROCCO. Whether fueling humanity's underdog spirit with raw heartfelt music or movies, he passionately lives life creating authentic driven art to inspire, enlighten, and heal the world. After more than a decade of modest indie releases as a band frontman, having played countless local, city, and out-of-state gigs as a solo-performer, the now Los Angeles based singer-songwriter and hyphenate proudly carries long-awaited optimism in the world of his debut album - IGNITED.Nicole Mendes of The Other Side Reviews writes, "If Billy Joel were to have a lovechild with Bruce Springsteen and it was raised by Goo Goo Dolls, the chances are Scott Rocco would be it."Mendes further pens, "One of the songs from his upcoming conceptual album Ignited, scheduled for release in 2022, ‘Wish You Well’ is a robust pop-rock ballad with some country undertones. Highly reminiscent of John Waite with some Billy Joel twinges, ‘Wish You Well’ seems to transport me back to the 1980s/1990s pop world. Adopting a heavier sound as compared to the country-inspired single ‘Sum of You’, Rocco showcases his versatility and evolution as a singer-songwriter."Colm Slattery of Fruit Sonic writes, "Wish You Well "shows off the undeniable talent of Scott Rocco in creating a universe that swirls about in a majestic hue."

Grant's passion and talent for songwriting took flight in 2002 at California’s Venice Beach and evolved and expanded over the years. Time allows him to look back at his journey differently now. Having risen above old troubles and off-course veers, an ease of musical integration within Fly's wide range of styles evolved. Classic, strong, and bold Grant Hill's music has the way of staying on your mind long after listening.

Both in the studio and now backed by the live band M.O.S., Grant has incredible musicians around him to tell the story of the journey. M.O.S. is Simrin Phull on guitar, Edwin Livingston (Natalie Cole, Elvin Jones, Mary Chapin Carpenter) on bass, drummer Devin Lebsack (White Wizzard, Hed PE), Joel Stites (Scapegoat Wax) on keys and backing vocals, and Nelson Bragg (Brian Wilson, The Quarter After) on percussion and backing vocals. 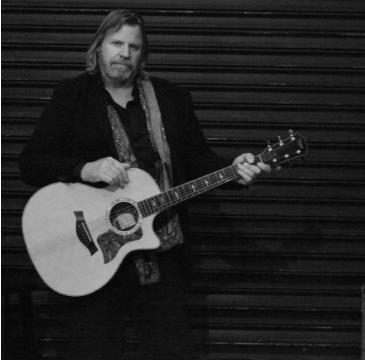