Scream Revolution is a group of 14-16 year old musicians who met in Redondo Beach, California. They have hit the stages of Saint Rocke, The Troubadour, Stomping Grounds “Future Legends Music Experience" Music Festival, Zebulon, The Standing Room, DiPiazza's, Hanger 24, The Redwood, the South Stage at The Manhattan Beach Hometown Fair, and Kitecta Plaza where they opened for a Chargers football game.

Scream Revolution is currently writing their first album to be released in 2022.

At its heart, Reject Your Reality is a teen garage band. We play punk and grunge with our own signature style. With Eli's ferocious drums, Griffin's laid back guitar, and Azi's growling vocals and driving bass, we create unique and exciting noise.

We've been playing music together for years, but only officially came together as Reject Your Reality in 2019.  With our biggest roadblock being pissed off neighbors (oh, and COVID), we've had a lot of time to hone in our sound.

Being two brothers and one brother from another mother, our goal is to have as much fun as possible.

A band of brotherly love, Dreamscape was founded in late 2019 out of the McHugh garage in Los Angeles, CA. The five-piece rock band continues to discover their own sound that stems from the songs of their youth. The lineup consists of Francis Gallagher on vocals, Justin Park and Matthew McHugh on guitar, Zach Driscoll on bass, and Sam Campisi on drums.
@dreamscapeofficial_
https://open.spotify.com/artist/57XtK94JEnD3EM4tldz8rF?si=ywoFqv_zQbuSQmaCBVhveQ 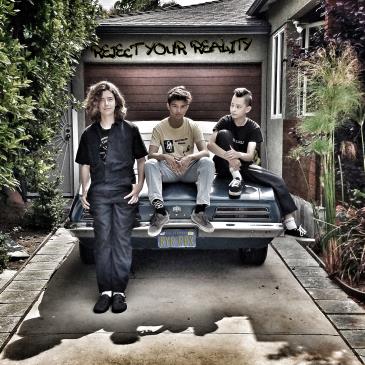