Sister Nancy, aka Muma Nancy, real name Ophlin Russell, (born January 2, 1962, Kingston, Jamaica) is a dancehall DJ and singer. She is known to the world as the first female dancehall DJ and was described as being a "dominating female voice for over two decades" on the dancehall scene. One of her most famous songs is "Bam Bam", labeled as a "well-known reggae anthem" by BBC and a "classic" by The Observer. Sister Nancy was one of 15 siblings. Her elder brother, Robert, is a very successful DJ and singer known as Brigadier Jerry. By her mid-teens, Sister Nancy performed with Briggy on the Jah Love Music sound system. After that, she worked for three years on the Stereophonic sound system with General Echo. In 1980, producer Winston Riley was the first to take her into the studio, resulting in her first single, "Papa Dean" for his Techniques label.

Sister Nancy went on to perform at Reggae Sunsplash, making her the first female deejay ever to perform there, and she is also the first female Jamaican deejay to tour internationally. She had further success with singles such as "One Two", "Money Can't Buy Me Love", "Transport Connection" and "Bam Bam". Her debut album, One Two was released in 1982. She went on to work with producer Henry "Junjo" Lawes, recording "A No Any Man Can Test Sister Nancy", "Bang Belly", and a collaboration with Yellowman, "Jah Mek Us Fe A Purpose". She continued to appear live, sometimes on Jahlove Music with her brother Briggy.

Bam Bam, a 1982 hit by legendary Dancehall singer Sister Nancy surged to No. 1 on Reggae song charts after it was featured in an episode of Netflix’s popular crime drama, Ozark, which was released over the weekend.

The track, which was certified silver in the UK this month, continues to pick up placements in popular culture, most recently as one of 47 tracks in another Netflix series called Maidand in the James Bond film, No Time To Die.

After this use on Ozark, which Variety reported was Netflix’s most-streamed original in 2020, it didn’t take long for the 40-year-old hit single to return to the music charts. Bam Bam surged to the No. 1 spot on the Top Reggae Song iTunes chart and Amazon’s Best Sellers list in the Reggae category after Season 4, part 1 of the show became available on Friday, January 21.

It is currently No. 2 on Amazon’s Best Sellers list and remains at No. 1 on iTunes for the third consecutive day. It previously topped the Reggae iTunes chart after it was featured in the Sony film The Interview in 2015.

First recorded in 1982, Sister Nancy’s Bam Bam took inspiration for its chorus from the Toots And The Maytals 1966 song of the same name, while its instrumental sampled Ansel Collins’ 1974 song Stalag 17. The song was produced by Winston Riley and appeared on Nancy’s One, Two album.
Billboard Magazine once noted that Nancy’s “Bam Bam is a strong contender for the title of most sampled reggae song of all time,” while the Rolling Stone cited the song’s extensive list of samples when the publication ranked it at No. 454 on their updated “500 Greatest Songs of All Time” list in 2021.

According to WhoSampled, there are 128 songs that have sampled Sister Nancy’s tune, including Famous by Kanye West and Rihanna, BAM by Jay-Z and Damian Marley, Lost Ones by Lauryn Hill, Bomb by Chris Brown featuring Wiz Khalifa, and Do To Me by H.E.R.

On Saturday, Sister Nancy, 60, whose real name is Ophlin Russell, shared the song’s return to charts on her Instagram page, where several fans gave the Dancehall veteran her flowers. But unbeknownst to some, she had not collected any royalties for use of the song for more than 34 years. It wasn’t until 2014, when she saw the song in a Reebok ad that she decided to seek legal advice on her music rights. According to her, she then received 50% ownership of her One, Two album and ten years in past compensation. “Yes, I’m getting the royalties now,” Nancy told NME in 2018. “Now I own 50% of the ‘One, Two’ album. At least I’m getting something now, I never used to get anything.”

The Jahlove Music sound system toured internationally with both Sister Nancy and Brigadier Jerry making their debut UK performances at the Brixton Town Hall, London in 1982. In 1996, Sister Nancy relocated to New Jersey. Since then Nancy has become one of the most in demand females in reggae show business. She is constantly flying to diverse places in the US and abroad doing shows. Sister Nancy is exceptionally talented and ever ready to perform with live bands or with a DJ on tracks. Check out some of her video links:

After quarantining herself for over a year during the initial covid times Sister Nancy is now working hard again on the frontline. She has recently been busy performing in Hawaii in late June, New York in July, England in August, San Diego and Los Angeles, CA and on club dates on the east coast. She is scheduled to tour Australia in March and Europe in may, July and August, 2022. 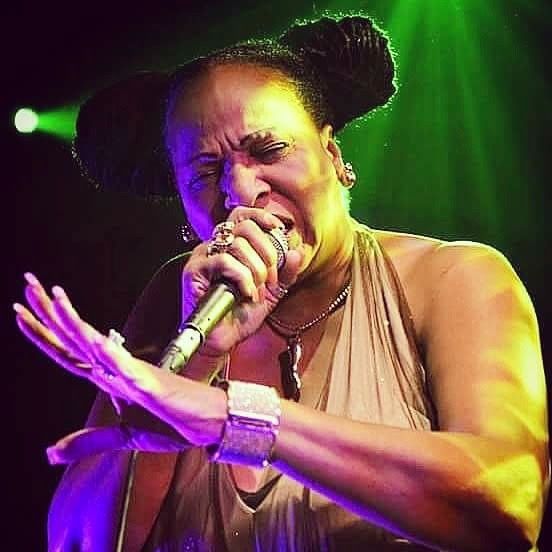