All General Admission Tickets are Standing Room only

Sofi Tukker has partnered with PLUS1 so that $1 from every ticket sold will go to support Planned Parenthood and their work delivering vital reproductive health care, sex education, and information to millions of women, men, and young people in the US and worldwide (www.plannedparenthood.org)


SOFI TUKKER's success was anything but planned. The band's very existence happened haphazardly after Sophie Hawley-Weld met Tucker Halpern during an art show at Brown University, where they both happened to be performing. It only took a couple of months before the NYC-based duo penned their viral track "Drinkee," which has since been featured in an Apple Watch Ad, racked up over 40 million Spotify streams, and received a Grammy nomination for Best Dance Recording. The song was the first they ever wrote, and became the backbone of their wildly successful EP, Soft Animals. In late 2017 the band scored their biggest Apple ad to date, when the company chose their unreleased track "Best Friend" to soundtrack the launch of their flagship iPhone X. The heat generated from the ad launched the song at radio worldwide; It is now steadily propelling up the US Pop and Alternative Radio charts and is perched in the upper echelons of the iTunes Singles and Shazam charts across the globe. Having already gotten as close to cultural world domination as a young act can get, SOFI TUKKER's future is looking brighter than ever. 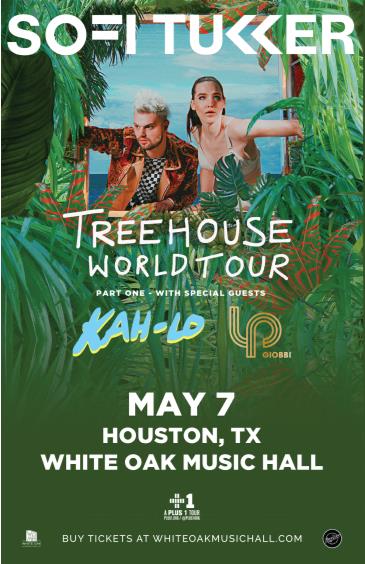