The Dancing Skeletons are four imaginative individuals from different backgrounds who mix musical elements like indie, alternative rock, hip-hop, and funk to bring about a unique sound that serves as a reminder on how breaking down barriers can produce something positive, in spite of our differences.
www.instagram.com/thedancingskeletons
www.facebook.com/thedancingskeletons
Spotify: https://open.spotify.com/artist/15yAWOGh6w7SU6FvYZniWf?si=OXJXfTc-Ty2tyIMppx_B4g&dl_branch=1

Holmes is a moody honey pop songstress based out of LA, and you've probably not heard her name yet. That's surprising though because in the span of her career, she's shared stages with 2000's heartthrobs like Aaron Carter, earned a 'Breakout Pop Artist of the Year' title and was a finalist in the Recording Academy's Grammy Showcase. Her new single "Good Thing" is actually the first single and debut video from Holmes but an early indicator that this is an artist ready to make a lasting impression.

Fusing the power and attitude of hard rock with danceable rhythms and precise hooks of indie music, SOKOJO is the rising rock 'n roll band from right here in Mid City LA.

SOKOJO’s songs hold meaningful messages and have a unique set of fingerprints - they draw influence from the scenes of the ’70s, ’80s, and ’90s, but have honed an original sound that feels at home in the 2020s,

Noticed in 2019 by producer and guitarist Burak Yerebakan through the wall separating their rehearsing rooms, he offered SOKOJO the chance to open for the Blondes at the infamous Viper Room. When the COVID-19 crisis wiped out a planned summer 2020 tour, the band turned its focus to the studio, booking sessions with Grammy-nominated engineer Zach Fisher at LA mega-studio Big Bad Sound (Weezer, Rancid, LA Guns), and producer Burak's own studio The Wakeful Room to record their debut EP, “MORE”.

The emerging French/Californian rock band YARD OF BLONDES is composed of Vincent Jacob(vocals/guitar), Fanny Hill (bass/vocals), Burak Yerebakan (guitar), and Forrest Mitchell (drums/vocals).Yard Of Blondes was first remarked in 2013 by Rodney Bingenheimer, legendary KROQ DJ,who began playing their track Murderology on his show. After playing all the venues around LAand a tour in their native France, the band was then featured on the compilation «I love you all thetime» along with Eagles Of Death Metal, Florence & The Machine, Kings Of Leon, JimmyEatWorld, and many more.

Yard of Blondes released its acclaimed debut album on May 19th, 2021. It was produced by BillyGraziadei, the legendary founder of Biohazard and hardcore legend. The album was mixed byMichael Patterson (Nine Inch Nails, Beck, Black Rebel Motorcycle Club,...) and mastered byMaor Applebaum (Faith No More).

“A heady little bit of alt-rock, stuffed with guitars with clever riffs and a refreshing Seventiespatina.” —Rolling Stone magazine 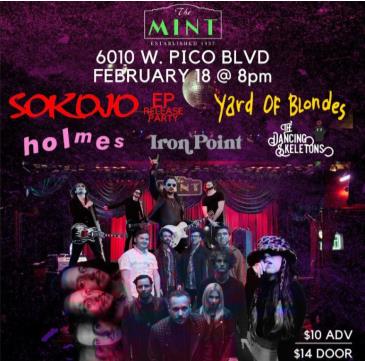