The band's music is a fusion of Delta blues, gypsy jazz, 1930s–era swing, klezmer, and other styles.[1] They found commercial success during the swing revival of the late 1990s with their 1996 single "Hell", written by Tom Maxwell. After a hiatus of several years, the original band members reunited and performed in 2007, playing in the U.S. and Canada.

In 2016, Mathus and Phillips reunited the band with a new lineup to tour in support of the 20th anniversary of their highest selling album, Hot.

The Squirrel Nut Zippers continue to tour, and released their new album, Beasts of Burgundy in March 2018, and singles "Mardi Gras for Christmas" and "Alone at Christmas" in November 2018.

Beckylin & Her Druthers are a wig country band out of the Bay Area recreating the glamour, fun, and sincerity of early 70’s TV country music. Their ever-expanding catalog of original songs touches on topics like Beckylin’s childhood in San Francisco with her mother, the original Cocaine Cowgirl. Their full repertoire spans the late 40’s through early 80’s.

Beckylin is the Glittering Queen of the Honky Tonk Scene.

She is also known as Rebecca Lin Coseboom.

The Druthers are the best pickers and players outside of Nashville 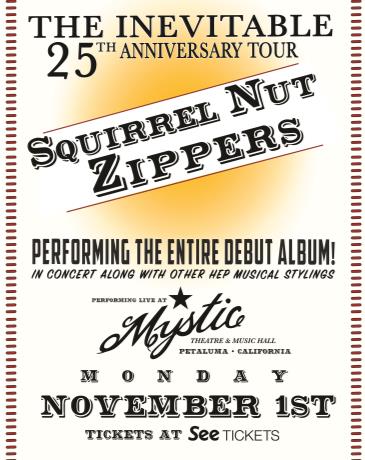