STADIUM4 is the brand new collaborative project by trance superstars Andy Moor & Lange. Andy Moor is known for his work as an producer and DJ. The English artist has used quite a few aliases in his career and has been a part of multiple stand out acts like Tilt and Whiteroom. Lange, another UK-based producer, is classified as one of the most significant dance artists in the past decade. Lange has amassed 20 UK top 40s, and has remixed acts such as The Pet Shop Boys and Faithless.

The two superstars teamed up to launch their new project, Stadium4, which just released their hit single titled “Unity” which was released by A State of Trance and Armada Music.

LA-native Casey Rasch will be opening up the night to supplement the bill. Having released on labels like, UNRSTRCTD, Lost Language, Black Hole Recordings, and Pharmacy Records, Casey has earned this opening slot. Get their early to catch the set. 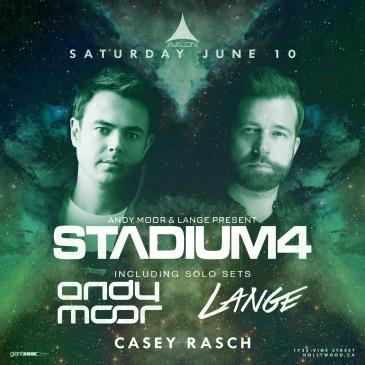